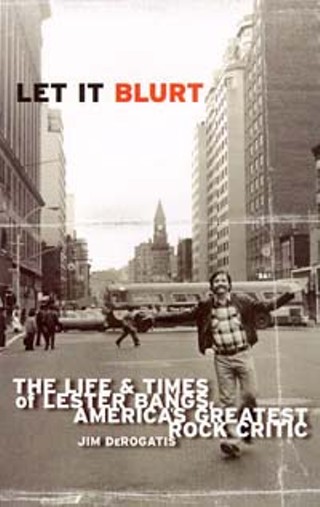 Lester Bangs (1948-1982) is the only rock critic in history who cultivated a star persona by writing record reviews. As a fan on the street rather than an observer in the stands, Bangs' prose oozed the horndog slang of rock & roll. At the same time, it revealed a number of we're-all-in-this-together insights that have since been repeated into gospel. His antics made you look, but his artfully expressed passions made you listen.

Chicago Sun-Times critic Jim DeRogatis met Bangs only once, interviewing him as a high-school journalist just two weeks before his drug-related death at age 33. Although this clearly had an impact on DeRogatis, he is careful not to make it the jumping-off point for Let It Blurt, the first Bangs biography. Instead, he goes into investigative reporter mode, tracing Bangs' lineage and detailing his "drug punk" adolescence in suburban San Diego.

Bangs' father was an ex-con and heavy drinker who perished in a fire when Lester was eight. His mother was a devout Jehovah's Witness. DeRogatis often returns to Bangs' dysfunctional upbringing and experiences with one-way religion to emphasize their influence in Bangs' contrarian passion for rock music, as well as his turbulent relationships with women and bosses. "I long ago gave up on giving the other fellow's taste the benefit of the doubt," Bangs wrote. "It led me to too many shitty, phony albums rhapsodized over by the influential sycophants serving as rock journalists in the absence of anyone with more style, taste and insight."

Indeed, the feeling of being cheated led Bangs to pan the MC5's Kick Out the Jams in his first Rolling Stone review. Although he would later come to love the MC5, his innate disrespect toward celebrity got him banned from Rolling Stone for several years. By then, Bangs had absconded to Detroit to work at Creem during its communal glory days. In New York, he dissected punk's alternating undercurrents of freedom and nihilism. Bangs also lived briefly in Austin, a residency highlighted by a disastrous gig opening for the Talking Heads with his band, the Delinquents.

DeRogatis recounts Bangs' saga through meticulous research and interviews, and he describes the atmosphere in which Bangs flourished. During the Seventies, record companies believed good reviews equaled gold records and often rewarded penniless critics with lavish junkets. Bangs explains scamming this system in "How To Be a Rock Critic," a comedic account of his craft's parasitical nature reprinted in Let It Blurt.

In defining Bangs' spot in rockcrit history, DeRogatis pits the academic leanings of Greil Marcus and Robert Christgau against the drug-happy "Noise Boys" contingent of Bangs, Richard Meltzer, and Nick Tosches. He cites others who contend Psychotic Reactions and Carburetor Dung, the 1987 Marcus-edited Bangs compendium, was an attempt to laud as well as sabotage Bangs. This is the one part of the book that reeks of oversimplification. Nevertheless, Let It Blurt remains an honest, vivid, and even odorous portrayal of a great writer who could be a bullshit huckster one minute and a contrite saint the next.