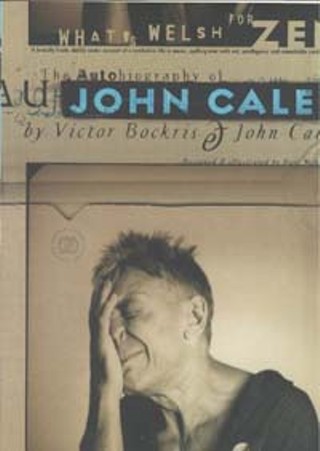 What's Welsh for Zen: The Autobiography of John Cale

by John Cale and Victor Bockris

It will come as little surprise to his fans that John Cale's autobiography What's Welsh for Zen is uncommonly literate, expressively revealing, and darkly humorous. That means all the sex, drugs, and rock & roll you want courtesy of his tenure in the Velvet Underground during Andy Warhol's Factory days and his acute insight into an erratic but intriguing recording and volatile performing career now in its fifth decade. In What's Welsh for Zen, Cale recounts this life with blunt and beautiful words.

It has been suggested that Cale is his own worst enemy, that his larger-than-life talents are too elusive to be presented effectively, but those talents may be less at fault than his unfailing romanticism. Cale is a true romantic and has always poured his liquid heart into composing. He has also suffered at the hands of the worshipful Velvet cult, which continues to demand answers to questions posed 33 years ago in the white heat of youth. In the subsequent decades, he has dodged the living legend status with a provocative vision of music and a divine understanding of his craft.

At 58, John Cale is ready to tell his stories -- in his charmingly eccentric way. That's all for the good: Biographies and autobiographies of musicians provide a crucial link between the fan and the artist, almost a necessity given the intimate nature of music appreciation. In a rhythmic cadence that hearkens to his native Welsh tongue, Cale sketches a poignant portrait of a simple working-class childhood in Wales in which music was light and in the dark the radio beckoned from across the sea. Contrast those beginnings with the worldly New York-based composer who today walks the slender boundary between classical music and rock & roll. The distance is astonishing.

What's Welsh for Zen seems to have been cathartic for its subject. Cale ruminates at length about his father, a coal miner rendered emotionally numb by the rigors of his job, and his mother, a Welsh-speaking school teacher whose bout with breast cancer mystifies her only son. He enumerates his musical training as a child prodigy, how his quest led him from Wales to London, where a correspondence with Aaron Copland provided entrée to America but not the American Dream. He deviated from his classical background when he met an aspiring musician named Lou Reed and founded the Velvet Underground, but it was Andy Warhol, the man emerging as the foremost pop culture puppeteer of the day, who orchestrated Cale into prominence.

"Here was a flinty character whose soft lightbulb complexion belied a determined interior," recalls Cale, with an eloquence that suggests a writer's heart in that composer's soul. Under Warhol's tutelage, the Velvet Underground became as much about style as substance, but Cale's desire to create music beyond the pale did not fit with Reed's monovision for the band. John Cale was ousted from the band he helped found after two albums.

As he tells it, it is difficult to decide whether Cale's subsequent music would have been as electrically charged had he not carried with him the spark of bitterness from the VU years. The Seventies saw his music as fully realized as it ever would be, from the pop melancholy of 1970's Vintage Violence to the impeccably suave Paris 1919 to the angry, braying trumpet-to-arms of 1979's Sabotage/Live. In the Eighties, he opened with more pure pop on Honi Soit, reverted to his classical instincts, then ended the decade with an ode to Andy Warhol, Songs for Drella. Drella was Cale's short-lived second collaboration with Lou Reed. When the Velvets reunited in 1993, however, the third time with Reed was not a charm but sheer artistic seduction. Cale describes the final break from the Velvet rut with poetic economy: "Lou got into the white limousine and split. That night I dreamed he did not drive back to Manhattan; he swam away, just drifted off into the wild blue yonder."

Credit for this marvelous autobiography also belongs to co-author Victor Bockris, the British-born scribe who has previously penned bios of Lou Reed, Blondie, Patti Smith, and Andy Warhol. It's clear that Bockris maintained the continuity of the book, since the information apparently came from Cale in non sequiturs much like his albums. No less responsible for the book's memorable presentation is Dave McKean, whose artwork, lyrical interpretation, and page design make it as aesthetically pleasing to the eye as it is to the mind -- a genuine rarity in this field. (Cale fanatics will want to check http://www.amazon.co.uk for the deluxe British edition, unbound and boxed. The hard-to-read memoir of Cale's late Seventies backup singer Deerfrance on the inside cover is included in the British edition as a separate booklet.)

It is no coincidence that John Cale's voice in What's Welsh for Zen is bardic. Bards were the Celtic order of minstrel poets whose verse and song celebrated heroic deeds and exploits. In Wales, where the ancient warrior race resided, the highest regard was given to language arts. Poetry, song, and recitation were valued as much as military skill, and even today those matters are prized. Wales is a land of legends, where King Arthur was born; that subtle magic imbues John Cale's music with otherworldly, primeval grace. Between the lines of What's Welsh for Zen lies the heart of a 21st-century bard.