Book Review: Paris Without Her: A Memoir by Gregory Curtis

In his latest book, the Austin author walks through the City of Light to find a new life after his wife's death 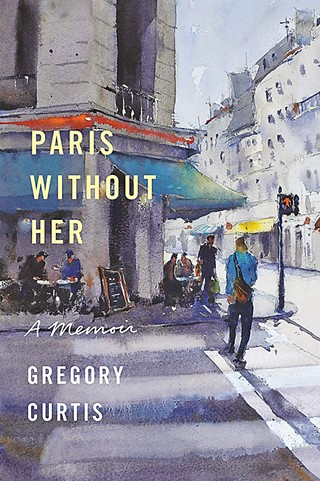 That Paris can be said to have top billing in the title of Gregory Curtis' memoir is meaningful not only because the City of Light is the book's primary setting, a place Curtis visited repeatedly with his wife Tracy during her life and one he continued to visit after her death, but because of the massive presence that Paris holds in Curtis' telling. To him, it is less a collection of buildings, streets, and people than a godlike being – huge, ancient, and deep, with its own sense of life and consciousness. It's a thing one is drawn to and yet it is indifferent to those who come to it. "Paris didn't care whether I was there or not," Curtis writes at one point, which makes it a place that can be explored without objection or reprisal – a place one may discover fully, and in so doing discover oneself.

The "her" of Paris Without Her is Curtis' wife Tracy. The two enjoyed 37 years together, though the final one was spent with Tracy engaged in one last painful struggle against cancer. This is where Curtis begins his story, following a brief prologue in which he describes first meeting Tracy in 1974 in the offices of the fledgling Texas Monthly – then situated in "a squat, miserable building at 15th and Guadalupe." It positions this as a widower's journey, in which he moves from his life of three and a half decades with his beloved to his "life ahead without her."

Curtis discovers the need to reconcile his past and future lives not long after Tracy's death. Magic, an old enthusiasm of his, becomes his new companion, as he orders DVDs to learn the tricks of the trade, but he comes to see his nights spent alone in his condo with these instructional videos as "a pathetic, almost comical substitute for the evenings Tracy and I had shared." He finds some relief from his grief in teaching at the University of Texas and working at the Ransom Center, as well as writing for various publications, but it's when he returns to Paris – a trip that was perhaps inevitable given how much he and Tracy loved the city – that his life ahead begins to take shape.

By way of explaining Paris' pull on him, Curtis first shares the stories of its pull on them, how on their first visit in the early Eighties, he and Tracy were enchanted by the real city even more than by the romantic version peddled by Gigi, Piaf, and the expat writers of the Lost Generation. Initially, their visits are much like any tourists': visiting the Louvre and the Eiffel Tower, eating at a Michelin-starred restaurant. But with each new visit – and they make several – the couple takes steps off that well-beaten track into the city beyond the attractions: dining at a small Italian café, going to horse races, sharing a meal at the home of Parisians they only just met.

This makes Paris increasingly personal to the couple, and it becomes the pattern for Curtis' visits to Paris without Tracy. He enrolls in intensive French courses at the Sorbonne. He visits Le Salon de l'Agriculture – basically the state fair of France. He goes to mass in cathedrals. He even indulges in a romantic liaison – an American in Paris' fantasy fulfilled – with an art history lecturer, though it proves to be brief and ultimately unhappy. And he takes walks – long meandering walks, just to see what's there.

As a flâneur – a wanderer of the streets – taking walks without destination or direction, Curtis becomes caught up in the life of the city, in the people he observes on the streets and in cafés and in museums. And the more he is absorbed in the history that informs the life he sees – when buildings were built and what notable writers and artists lived there and who the figures in statues were – the more this becomes his Paris and not the city he shared with Tracy. She remains a ghostly presence, appearing in his dreams and seeming to appear in crowds and on corners, as if she might still be alive and in Paris. But like an apparition, she fades, and over time, Curtis finds himself "alone but not lonely" in this grand city. It may be as succinct a realization as any that a widower has reconciled his past life with the woman he loved and his future life without her.

Paris Without Her: A Memoir

A version of this article appeared in print on May 21, 2021 with the headline: Widower’s Walk