"Daniel Johnston: I Live My Broken Dreams" Tells the Story of an Artist

The first-ever museum exhibition of Daniel Johnston's work digs deep into the man, the myths 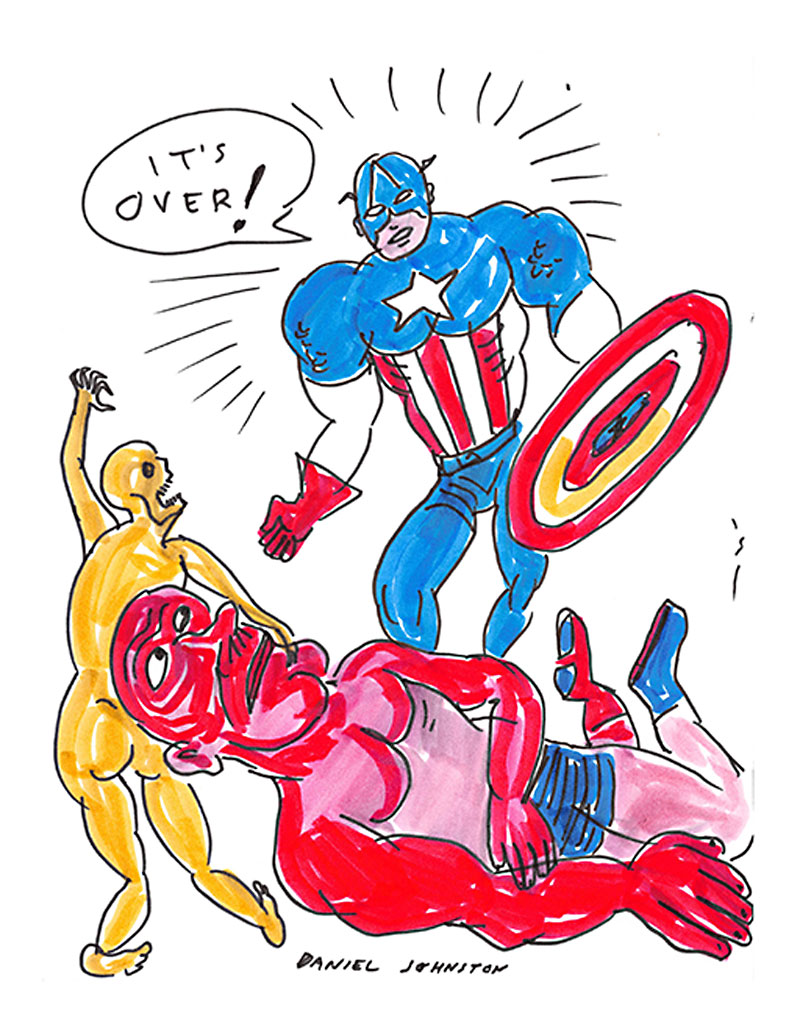 Daniel Johnston was easy to underestimate. His songs were mostly simple tunes that covered the same territory – love, redemptive and unrequited; his own pain; his lost love Laurie – over and over. He'd record them on cassettes in the basement of his parents' house, so they sounded ragged and raw, and his only way to distribute them was to hand them out personally to passersby on the Drag. His artwork consisted of simple cartoons in which Captain America, Casper the Friendly Ghost, boxers, devils, and ducks made frequent appearances, in images as rough and random as the ones daydreaming kids doodle in composition books during boring school classes.

But simple shouldn't be confused with simplistic. Within Johnston's material lives something deeply personal and true, a man facing his many demons as directly and honestly as he can. And he shared it with whatever tools were at hand: a cheap tape recorder, an untuned piano, and his heartfelt, straining voice; comic book characters, biblical figures, and colored markers; his troubled mind and his yearning heart. So while the work may have been simple and simply produced, it connected with a lot of people and had an unusually powerful impact.

Most often, we hear about that impact through the world of music, but the art world responded to Johnston's work, too, as evidenced by the Contemporary Austin's current exhibition, "Daniel Johnston: I Live My Broken Dreams," the very first overview of Johnston's works by a museum. Heather Pesanti, the Contemporary's chief curator and director of curatorial affairs, and Robin K. Williams, associate curator, have assembled a wealth of the late artist's recordings, home movies, notebooks, posters, and even comics, toys, and vinyl from his extensive collections, with an eye toward providing viewers with not only a comprehensive picture of Johnston's life and art, but also a sense of how these items and influences contributed to his creative process across all mediums.

People familiar with Johnston's work may already know about his struggles with bipolar disorder and associate that with his musical swings between sunny poptimism ("True Love Will Find You in the End") and dark brood-ballads ("Life in Vain"). It's tied to the myth of Johnston as tortured genius – the "g-word" having been, as writer Ken Lieck noted in an illuminating feature for the Chronicle in 1999, "both a blessing and a curse for Johnston, who sees the world through glasses of a color for which the rest of us have yet to find a name." But there's more to the songwriter/artist's inspiration than his mental health, and the exhibition explores the myths that Johnston created for himself. For instance, his never-ending battle between extreme good and extreme evil – Captain America vs. Satan, Joe Boxer against Vile Corrupt (the evil version of Jeremiah, the innocent frog of "Hi, How Are You" fame) – is rooted in Johnston's upbringing in a devout Christian family and his fanboy fascination with Marvel superheroes (many of his depictions of Captain America and the Incredible Hulk are lifted directly from the drawings of comics creator supreme Jack "King" Kirby). In Johnston's cosmic view, the comic book and the Book of Revelation are the same story – the ultimate crossover.

"Daniel Johnston: I Live My Broken Dreams" gives viewers the chance to understand where Johnston was coming from in these and other aspects of his art and what his impact was all about. It will be open for six months, but be forewarned, interest in the exhibition is running high, and owing to COVID precautions, the Contemporary is limiting attendance. Visitors are required to reserve tickets in advance. For reservations, go to thecontemporaryaustin.org/visit.

A version of this article appeared in print on September 17, 2021 with the headline: Story of an Artist