Book Review: The Hunting Wives by May Cobb

When the Austin author leads you into the Piney Woods for her new thriller, the trip is sultry and surprising 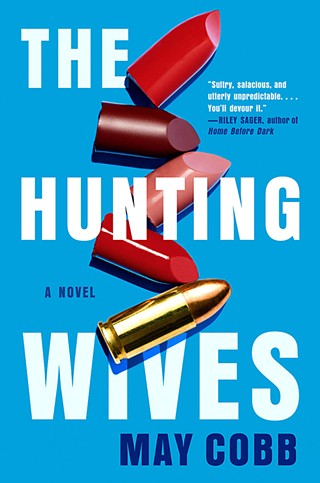 It's scorching. It's humid. You're two glasses of wine too many in. You're next to a beautiful woman, a woman who scares you a little, and you said you'd stop putting yourself in these situations but for all your better judgment, you can't seem to tear your eyes away from her. But maybe you shouldn't sweat it. Maybe summers are for fun-bad decisions. How dangerous could things get?

Per Austin author May Cobb's second thriller, The Hunting Wives: pretty dangerous. Protagonist Sophie O'Neill engineered her family's move to the Piney Woods town where she went to high school but quickly finds herself chafing against the slow, stay-at-home life she thought she wanted. It's to her great relief that she eventually falls in with Margot Banks' titular clique of Southern socialites, whose regular girls' nights tend to start with shooting skeet and end with reckless, clandestine partying. In very little time, Sophie is in over her head but loath to leave Margot's intoxicating orbit. First comes lying, then comes cheating, then comes a murder, and the question of how much Sophie is willing to help cover up.

On top of being compulsively readable – I really and truly picked up this book at 10pm on a work night intending to read maybe two chapters and then didn't move from my chair until I'd read the last page in the wee small hours of the morning – one of Cobb's biggest triumphs is the way she captures the total derangement that comes with a capital-C Crush. The Hunting Wives is hardly the first story of the new girl in town joining a dubious coterie, but where a great deal of those narratives would relegate the homoerotic draw of the Queen Bee to subtext, Cobb lets it live on the page. Sophie is powerfully attracted to Margot as well as desirous of a friend group, and the way she pores over Margot's social media posts, overanalyzes her text messages, and preens when she gets special attention is almost embarrassingly real. So, too, is the hamster wheel Sophie finds herself on throughout the novel: She knows she's going along with things she's not proud of, doing things that aren't smart, and her promises to herself to stop it and get her shit together feels absolutely sincere, even as the reader suspects those are resolutions made to be broken. It takes a deft hand to make a thriller's spiral feel both inevitable yet preventable, but Cobb executes it beautifully. Sophie's present wants and needs are vivid and drive the narrative; I only wished for a little more exploration of how she viewed herself holistically – as someone ambitious, as a wife, as a mother, as a queer woman, as a friend.

With its keen observations about how a very specific class of white, wealthy East Texas women operate, its luxuriation in messy people being messy, and some genuinely satisfying twists, The Hunting Wives is a book made to be toasted with a martini, savored poolside, devoured on a muggy front porch at dusk. If you stay up too late, that's okay. I'm pretty sure that's the exact kind of fun-bad decision that summer is for.

BookPeople will host a virtual event with May Cobb discussing The Hunting Wives with author Riley Sager Tue., May 18, 6pm. To register, visit bookpeople.com.

A version of this article appeared in print on May 14, 2021 with the headline: Fun-Bad Decisions