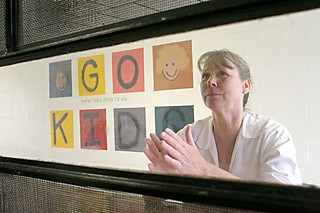 When a child is sexually abused, there isn't necessarily physical evidence to prove any abuse happened. The lack of any physical evidence of abuse is a central issue in the case of Fran and Dan Keller, convicted of sexually assaulting a child left in their care in 1991 – an appeal of that case is currently pending before a Travis County district court.

Fran Keller and her husband Dan were sentenced to 48 years in prison for allegedly sexually abusing a 3-year-old girl, Christy Chaviers, who in 1991 was an infrequent drop-in at the daycare Fran and her husband Dan ran in their Oak Hill home. After a day in care at the Kellers' home that summer, Christy told her mother, Suzanne Stratton, that Dan Keller spanked her. That allegation quickly morphed into an allegation of sexual abuse – and then into wilder allegations of abuse perpetrated by the middle-aged couple on Chaviers and two other children whose parents were friendly with Stratton. The allegations turned fantastical: The Kellers had taken the kids on plane rides to Mexico, subjected them to satanic bone-replacing rituals, killed animals and babies – allegations that led Christy's therapist, then Donna David-Campbell, to conclude Christy had been a victim of "ritual abuse."

In 2008, the Chronicle began a reinvestigation of the case against the Kellers and found that there was, in fact, scant actual evidence that any children had been abused at the Kellers', let alone any evidence of satanic ritual abuse.

Indeed, the only physical evidence that suggested Christy had been abused came in the form of testimony from a then-novice Brackenridge emergency room doctor, Michael Mouw, who examined Christy in August 1991. In the fall of 1992, Mouw testified in court that in examining Christy he found deformities to her vaginal area that could be signs of sexual abuse. That determination was confirmed by pediatrician Beth Nauert; but notably, Nauert examined Christy some two weeks after Mouw and found no signs of any deformities.

When he was contacted for what eventually became our 2009 story on the case ("Believing the Children," March 27, 2009), Mouw said that not long after he testified at the Kellers' 1992 hearing he realized that what he thought were injuries were in fact "normal variants" of female genitalia. Mouw's reversal – that in the 1992 trial he had provided what he now knows to be erroneous medical testimony – is among the claims for relief included in an exhaustive writ filed in January on Fran Keller's behalf by Austin defense attorney Keith Hampton. Mouw's reconsideration has eliminated the only piece of physical evidence suggesting that the Kellers abused Christy, and the only concrete evidence that any crime ever happened.

Mouw's changed opinion took center stage at a hearing Tuesday afternoon before retired District Judge Wilford Flowers, who as an elected judge presided over the Kellers' original trial. Under questioning by Hampton, Mouw testified that he had only been practicing medicine for some four years before examining Christy and had little experience or training in conducting sexual abuse examinations of children. It was a "chart I picked up randomly in the middle of a busy ER shift at Brackenridge," he said. Mouw examined Christy and found what he characterized as injuries to her genitalia.

It wasn't until several years after he'd testified about the alleged injuries that he attended a presentation by Nauert that detailed normal variations of female genitalia. Nauert showed a slide of normal genitalia that looked exactly like what he'd seen when he'd examined Christy. "Kind of a lightbulb went off and I was like, 'that's just like what I saw'" in Christy, he recalled Tuesday afternoon. Is there any doubt in your mind today, that what you saw in 1991 wasn't an injury, but was in fact a normal variant?, Hampton asked of Mouw.

Nonetheless, prosecutor Scott Taliaferro dug in to Mouw, asking about what he'd told the Chronicle in 2009 – suggesting that Mouw's regret and subsequent action to correct his testimony was somehow prompted by our article, which Taliaferro characterized as not reflecting every bit of testimony from the Kellers' trial and including information that had not been provided to jurors. Mouw said he regretted not pressing the issue sooner – it was Nauert's presentation that first prompted his doubts, which were compounded by a subsequent Texas Monthly article by Gary Cartwright. Mouw recalled that after the Nauert presentation, he did in fact reach out to Austin Police with his concerns, and was told he "didn't need to worry about it because there was stuff he couldn't tell me about ... but [the APD detective] was convinced they were guilty."

Mouw testified that he simply was not trained to examine children for sexual abuse and that the science of doing so has evolved significantly in the intervening 22 years. Moreover, he said he did not have access to a culposcope back then, a tool that likely would make moot contemporary questions about that initial examination. A culposcope is a magnifying device that helps doctors to examine the vagina – and takes magnified pictures of examined female genitalia. Mouw testified that had he used one in 1991, the questions being asked now would be readily answered by photographic evidence. "The main issue for me on this case [is if I] had a culposcope [we] would've had photographs" of Christy's genitalia, which would be "much more reliable forensic" evidence, he said.

After a nearly three-hour hearing, the case was left pending in anticipation of further review.

A more detailed version of this story is posted on the NewsDesk blog, at austinchronicle.com/blogs/news.