'Here's the scenario: You're in a sketchy neighborhood in Mexico City in search of your own personal white whale, a 1937 Bugatti Type 57, one of the rarest cars ever made. You want it, you've got a wad of cash to show you're a serious buyer, and you've got a scout who says he's going to take you to the car.

When you get there the scout takes your $30,000 and says he's just going to take a second to get the door open to the building where he's led you. He goes inside and...disappears. With your Gs. You chase him, but it's no good, he's got an accomplice and he is gone.

What do you do?

You hook up with a former American military man and Blackwater operative, Andrew, someone who knows how to – ahem – handle such things, of course.

At least that's what you do if you're Antonio Brunet and Yusuf Johnson, owners of Austin's Motoreum, a high-end classic car dealership, and the stars – along with Andrew, of course – of the new Discovery Channel series Chrome Underground. In order to procure the rarest and most profitable vehicles they can find, Brunet and Johnson travel abroad, primarily in Latin America, in search of gems they can bring back to Austin for display, and sale, at their warehouse-like facility on Highway 620.

Earlier this year, the Chronicle sat down with Brunet and Johnson to talk friendship, classic cars, and the real deal with Andrew. Chrome Underground premieres tomorrow (5/23), 9pm, on Discovery Channel. (See end of interview for a clip.) 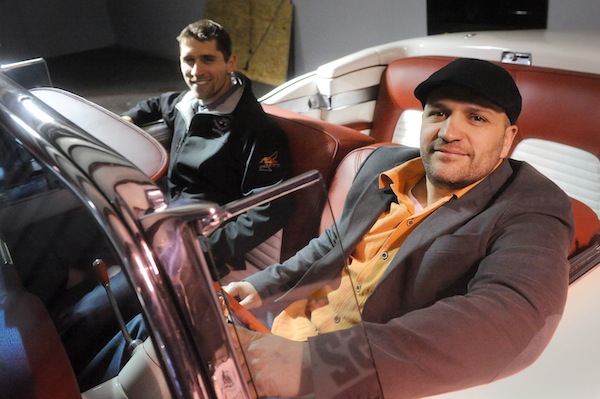 Austin Chronicle: How did you guys meet and how long have you known each other?

Antonio Brunet: We've known each other for about 15 years, which is about the amount of time we've been in business together. We met in college, during a semester abroad.

Antonio Brunet: My girlfriend was studying international studies at the time and she needed a semester abroad.

Austin Chronicle: So you were studying her...

Antonio Brunet: Well, we were living together at the time so I was like, let's go to Mexico!

Yusuf Johnson: He thought he'd do pretty good in the class – his Spanish is pretty good.

Austin Chronicle: So you met while you were there, just randomly?

Yusuf Johnson: Yeah. We were in the same program at the same school.

Austin Chronicle: And you just hit it off?

Antonio Brunet: Yes, we just hit it off. Yusuf and I are just, truly, entrepreneurs...and as soon as we started talking we started talking about business and a little bit about philosophy and just our views on the world and we hit it off right away and ever since we've been doing business together.

Austin Chronicle: So were you doing cars the whole time? Or is that something that came after?

Antonio Brunet: We do two things: We do cars, and we do real estate. Yusuf knows a lot about real estate, I know a bit about the cars. I'm passionate about cars – I've been doing cars since I was in high school. I paid for college buying and selling classic cars.

Yusuf Johnson: Yeah, don't most kids do that?

Antonio Brunet: Literally, the month we met, the month that we came back we bought our first collector car together...

Austin Chronicle: What was that car?

Antonio Brunet: That was a '63 Vette, actually, a blue one. And we started buying and selling. We didn't live in the same town, I was still living in Virginia – I actually was a teacher for three years, right after college. I taught high school, architectural engineering and drafting.

Yusuf Johnson: His goal was to reform the educational system, and then said, nah! Forget it!

Antonio Brunet: I was still buying and selling cars because it was my hobby, that's what I was really passionate about. And you know as we talked all the time we decided, let's give this a shot as a full-time business, let's create our own job. And we did. And here we are now.

Austin Chronicle:AC: The cross-border [procuring of cars], that's been your model the whole time?

Antonio Brunet: It's not really a model, it came out of innovation, again. … I’m Mexican, originally. I came to the U.S. in 1995. I grew up with a lot of people bringing used cars from the U.S.

Austin Chronicle: Yeah, that's what I was going to say: I'm used to seeing... an opposite migration of cars.

Antonio Brunet: Yeah. My passion is collector cars. I mean, literally, some of the best cars you can imagine exist in Mexico and South America, in Latin America.

Austin Chronicle: So you knew they were there – and not just the minivans they bring down I-35 to Mexico.

Antonio Brunet: Exactly. And we recognized really the market and price difference across borders. So, let's give this a shot; we tried it and we expanded it.

Austin Chronicle: What do you think is the best Latin American country to find classic cars?

Yusuf Johnson: Well, Mexico, of course, because he's from Mexico...

Austin Chronicle: If Mexico didn't count...or maybe it is Mexico?

Antonio Brunet: I would say, Argentina.

Austin Chronicle: Why is that?

Antonio Brunet: Because there is an incredible amount of European immigrants to South America, mainly to Argentina, from Italy and France. So a lot of the craftsmen and collectors have moved their collections and craftsmanship down to Argentina.

Antonio Brunet: No, we don't. We do a lot of Europe. The market there is strong and goes up and down like it does in the U.S., so there's always that ability to find a niche in both. 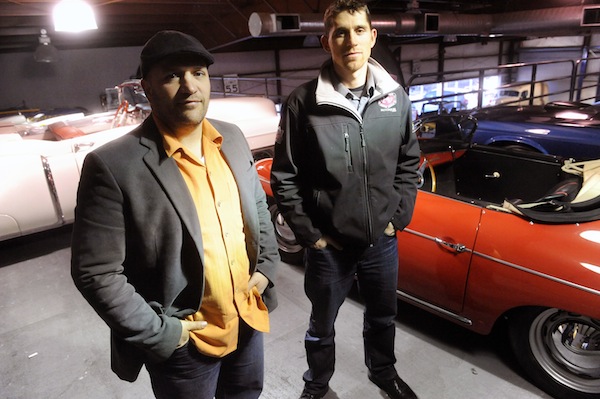 Austin Chronicle: In watching the first episode of the show, it's a little crazy, right? Do you normally get into so much crazy... and what's up with Andrew? Is he real? I kind of felt like he was made up. He's like an action figure.

Antonio Brunet: He kind of does.

Yusuf and I have been doing this for 15 years and our strategy has always been to immerse yourself into the culture, lay low and be one of the locals. And it happened that, through this show, Chrome Underground, in this particular transaction, things were just going completely wrong.

Austin Chronicle: How would you describe Andrew?

Yusuf Johnson: He's from a completely different background from Antonio and I. It's worlds apart. Antonio and I have had this, this is the way we operate – he's got a whole different set of skills and demeanor and background, which is military, right? What he's experienced, none of us can relate to, being in that climate of war...so he's looking at things through lenses that are very different than us.

Antonio Brunet: I would describe him exactly like that. The fact is that he is a product of war and of his training. We all live in our own worlds and the truth is in the eye of the beholder. And his truth is slightly different from ours.

Austin Chronicle: So what you're saying is you're glad he actually likes you.

Antonio Brunet: Absolutely. Wouldn't you be?

Finding the car and going to get it, that's probably a week or two-week process. But to get to it, to find it, to actually hear that it exists, that literally takes years. To grow the network of people outside the borders of the U.S. is extremely difficult.

Austin Chronicle: So how often do you travel?

Antonio Brunet: This last year we went to Brazil, Argentina, Mexico, France, England, Monaco, and Italy. I actually travel quite a bit, because I don't just look for cars outside the U.S., but inside the U.S. too.

Austin Chronicle: Where have you found the best thing in the United States?

Antonio Brunet: That's a good question. There's actually a different market. Texas and Arizona are fantastic places to find cars because of the weather [that means many are still in good condition]. Funny enough, Seattle is a really good place to find them, because of the ports. So it depends on what cars you're looking for. Kentucky – I love Kentucky, because I love Corvettes. Bowling Green [where Corvette is made] is in Kentucky and there are a lot of Corvettes there that haven't been found.

Austin Chronicle: Is there one [car] that you'd like to find, one you really wish you could find?

Yusuf Johnson: Yes, in the beginning episode, the Bugatti, is like, a legendary car in the industry and there are only a handful that are original and still exist. So finding a Bugatti, for both Antonio and I, would be like the holy grail...

Antonio Brunet: And like we were talking about, not just a Bugatti that's already been on the market...

Antonio Brunet: ...but the Bugatti that nobody's seen.

Austin Chronicle: Yeah, that's [your] white whale. So what do you hope comes out of this show?

Antonio Brunet: What we hope to come out of this show is to grow our network of people. We are entrepreneurs that are fueled by our philanthropic ideals. We do philanthropic work in the Philippines and in Central America...

Antonio Brunet: ...and we'd like to expand that work. That's what we hope to get out of this show.

Austin Chronicle: And to find the white whale.