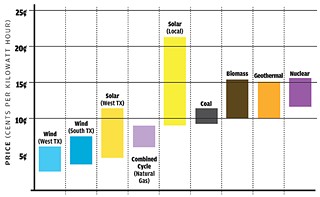 Despite the common solar-industry mantra that "prices are coming down," it nonetheless came as a surprise in May when Austin Energy secured a solar power purchase agreement with Recurrent Energy for less than 5 cents per kilowatt hour. AE had seemingly leapt into the future. "The prices Austin Energy was able to get on this deal are where the industry was aiming to be in 2020," says Public Citizen Director Tom "Smitty" Smith, who serves on the Generation Resource Planning Task Force. The task force spends a lot of time thinking about the future. It will soon be releasing recommendations for AE's Gener­a­tion Plan 2024 aspirations, meant to replace the current goals, one of which is to bring 200 megawatts of solar power online by 2020. The Recurrent deal is a contract to build a 150-megawatt plant by the end of 2016. Given another 50 MW coming from rooftop solar and the Webberville Solar Farm, AE now expects to meet its solar commitment three years early.

The announcement of the deal was dramatic. Recurrent was not the name many expected to hear. In March, City Council had given the go-ahead to negotiate with SunEdison – or other qualified bidder – for a similar arrangement at less than 5 cents, with press reports noting that the price was likely an all-time industry low. Nonetheless, says AE spokesman Carlos Cordova, "We ended up selecting Recurrent for better pricing contract terms – so that gives you an idea of this deal." The West Texas plant will be the state's biggest one-site solar facility. The original Request for Proposals sought 50 MW, says Cordova, "but the prices were so good that we decided to purchase 150."

The price is so low that, according to AE forecasts, it may actually reduce electricity rates. The 20-year power purchase agreement will also help offset the volatility of natural gas prices. "Since it is locked in for so many years," says Electric Utility Com­mission Chair Gary "Bernie" Bernfeld, "it really helps stabilize that variability in the fuel service charge that so many people get upset about." At the same time, says Bernfeld, the price point is so low "it actually brings up a concern. ... have they underbid the contract?" The EUC has determined thus far that Recurrent will be able to deliver, he says – but only time will tell.

The price may also signal a broader shift in the market. Cordova says it has "turned the solar industry on its head." Both he and Smith summoned the phrase "game changer" to describe the deal. "It's the first time," says Smith, "that the cost of solar has been below the cost of conventional power." He points out that a combination of state, federal, and local factors have created this window of opportunity. The state-funded CREZ project (Competitive Renewable Energy Zone) was completed this spring, providing ample transmission for electricity from West Texas, where solar can take up the daytime slack left by wind, which blows strongest at night. Federal production tax credits (expiring in 2016) also play a major role. And locally, the City Council moved to take advantage of those opportunities, says Smith, because of groundwork laid by the 2012 Solar Advisory Committee which, given industry momentum, counseled more ambition with solar.

Innovation and industry maturation play a role, too. Bernfeld notes that solar panel prices have come down 75% over the last decade. Given improvements in production costs and efficiency, the price pressure now has shifted to the cost of land (for utility-scale solar), labor, and permitting – an area he says the city is reviewing.

The question remains, then, whether the Recurrent deal is replicable. "Certainly it's a significant milestone," says Russel Smith, executive director of the Texas Renewable Energy Industries Association. Still, he notes, "The market is a constantly changing thing." While municipal utilities in particular have unique circumstances to consider when making internal decisions, the Recurrent contract does provide "hope and drive" to push for similar deals, he says, adding, "It certainly won't be able to be said ... that it's not possible."

"Others will follow," believes Cordova. "Austin Energy has always been a leader with green power, and this is just another example," he says. "We helped develop the wind industry in Texas, and we're doing it again with the solar industry."

Another test of AE's leadership will be the 2024 Generation Plan. By council mandate, it must "meet or exceed" current goals. It remains to be seen how far the 2020 plan's success will push the city toward the former (meet) or the latter (exceed). The recommendations coming out of the Gener­ation Resource Planning Task Force will provide a clue. Scheduled for release June 30, those recommendations have now been delayed, pending two additional meetings. "The size and the price of the solar contract are certainly going to affect our analysis of future potential for additional solar energy," says Smith. He otherwise remains mum on the task force's discussions, by agreement with other members.

The task force meetings are open to the public. The last one will be held at 2:30pm Wednesday, July 9, in the City Hall Boards and Commis­sions Rm. 1101.