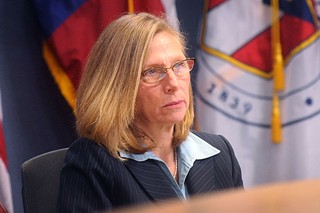 In the spirit of the show-stopping breakup song from Dreamgirls – "And I Am Telling You I'm Not Going" – Mayor Lee Leffingwell last week adamantly refused to relinquish his seat on the coordinating committee of the Balcones Canyonlands Conservation Planning Organization.

Environmental activists have been calling for his resignation because of his support for State Highway 45 Southwest, which would travel across the recharge zone of the Edwards Aquifer, near the entrance of the ecologically sensitive Flint Ridge Cave, home of at least two rare spider habitats. There are differing opinions on how much power the BCCP committee wields in determining whether SH 45 can be built in compliance with the federal Habitat Conservation Plan and federal permit jointly held by the city and county. But activists, and apparently the rest of City Council, don't want to chance it by having an SH 45 supporter on the committee should the road question come up for a vote. It happens that the second of the two voting members of the committee is Commissioner Gerald Daugherty, a central backer of SH 45.

In the end, the debate over whether to replace Leffingwell was left hanging at last week's Council meeting, after a failed initial attempt to remove him from the committee. So Leffingwell, the committee's chairman for several years, is staying put for now – at least until Council returns from its summer break Aug. 7. The BCCP committee isn't scheduled to meet again until Aug. 14.

The issue of Leffingwell's service on the committee first emerged publicly during a strained exchange at the Council work session June 24, followed by another tense round at the June 26 Council meeting. At the work session, Council Member Laura Morrison raised the prospect of a replacement, stating, without naming names, that it would be more appropriate if the city's representative on the BCCP committee shared the same anti-SH 45 sentiment as the six other council members. (Council last month voted 6-1, with Leffingwell dissenting, to oppose the road project spearheaded by Travis and Hays counties and the Capital Area Metropolitan Plan­ning Organization.)

Leffingwell appeared deeply offended. "Obviously this is about me," he said. "I really am a little bit resentful of having my environmental integrity questioned."

"I fully respect your integrity [...] and the work you've done," Morrison replied. "I think this is a policy issue [...] this is not a personality issue [...] it is a matter of perspective and policy."

"I think it goes beyond the bounds of decency," Leffingwell shot back.

Council Member Bill Spelman then tried to gain assurances from Leffingwell that he wouldn't place SH 45 on the committee agenda. The mayor agreed, and also suggested he wouldn't support Daugherty, should he try to secure the committee's two-man blessing on the road project. (Daugherty has said he won't make such an attempt.)

But the matter didn't die at the work session. At last week's Council meeting, Council Member Kathie Tovo moved to replace Lef­fingwell with Morrison on the committee. The motion died for lack of a second. Spelman and others stated their preference to revisit the matter at the Aug. 7 Council meeting, since the BCCP committee wasn't meeting before then. "I feel like a delay isn't going to get us to a different place in August," Tovo said in making her motion.