pdf
ON THE COVER:
The Return of ... the Cassette
news

In the Name of Ann Richards

AISD's School for Young Women Leaders is a district showcase – does its glittering reputation hide a darker side for teachers and students?

Then There's This: The Power of Threats

UT Regents Fight Heats Up as Board Reshuffles

Spelman and Martinez drill staffers over cost projections and turnover

The Hightower Report: Police Destroy the 'Garden of Eden'

Police destroy the 'Garden of Eden'

The heat was on

How to Avoid a Bad Review

One restaurant's epic fail is a lesson for us all

Are chef shuffles any of our business?

The Return of ... the Cassette

The Walkman revolutionized portable music. Can their fodder – cassettes – jump the shark?

Get Your Burdens Lifted

Take It and Break It

The Wild and Hollow

Runnin' with the Wolf

The Wolf That Howls

The 40-year marriage of two visual artists is explored in this documentary.

Ethan Hawke and Selena Gomez try, but they can't getaway from this action mess.

A bunch of sixth-graders playing capture the flag in the park lays the groundwork for a disturbingly inventive film.

One Direction: This Is Us

This big, fat kiss to the band's young, female fans is directed by that advocate for good nutrition: Super Size Me's Morgan Spurlock.

For this Michener Playwriting Fellow, autumn brings local premieres of two of her plays

The Georgetown Palace production isn't always effective, but it gets at the continued relevance of Aaron Sorkin's script
columns 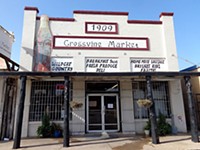 Can you handle a week of PRIDE? We know you can!

Waiting for the other person to die

Announcing the 121st running of the University of Texas Longhorns