APD Brass Shifts Up, Down, Across 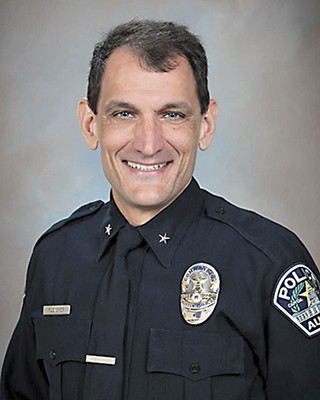 The upper echelons of the Austin Police Department saw some major changes late last month, with one man demoted, another promoted, and a third saying "sayonara."

In a brief email to APD commanders, lieutenants, and assistant chiefs, then-Assistant Chief Stephen Deaton – appointed to the AC job less than a year ago when Assistant Chief of Police David Carter stepped down to take the job as UTPD chief – wrote that he had decided to shed his AC title and step down a rank, to commander, in order to pursue a "relationship I recently began" with one of the executive assistants who works with the chiefs on the fifth floor of APD's Downtown HQ. "I know most all of you have heard in some form of the recent rumors that have been floating around concerning my personal life and relationships," Deaton wrote on April 24. Because of the relationship with a subordinate civilian employee, Deaton "found myself in the position of having to choose between staying in my current assignment and/or pursuing the relationship." He said the choice was easy – he would pick relationship over fifth floor, effective April 27. He called it a "voluntary decision" he felt was in both his and the department's best interest.

That Deaton's romantic relationship was not subjected to at least a cursory inquiry by Internal Affairs came as a surprise to some officers who note that, in the past, similar romantic relationships have been reviewed for possible policy violations. Asked about the apparent break from tradition, Chief Art Acevedo dismissed the notion that Deaton was receiving some sort of favor. Essentially, he said, Deaton has been demoted for his actions. "You can't remain an assistant chief [under this scenario]," he said. "So whether he wanted to [remain an AC] or not, that's not relevant."

As for filling Deaton's AC seat, Acevedo quickly tapped Cmdr. Jason Dusterhoft for the job. Dusterhoft has been with the department since 1995, and during that time has earned 21 commendations for outstanding work – but has also had two not insignificant run-ins with Internal Affairs. Eighteen months after joining the force, Dusterhoft was indefinitely suspended for failing to report that officers working under his off-duty contract at the Austin Music Hall had taken money a security guard had skimmed from the door. Dusterhoft appealed the suspension and won: Although an arbitrator found that he had failed to report the illegal behavior by fellow officers, choosing to "remain silent" and thereby demonstrating "a tolerance for corruption," the arbitrator found also that the city had overstepped in claiming that Dusterhoft, as the holder of the off-duty contract, had some greater responsibility to report the incident than did other officers who were aware of what happened. And in 2001, Dusterhoft was given five days off for allegedly trying to influence patrol officers to give a "break" to a friend who had been pulled over for having a busted headlight on his car and was given a citation for driving without proof of insurance. The beat officers reported the incident to IA. When questioned about the incident, Dusterhoft first said that he did not ask the officers not to write a ticket, but later elaborated that he was only hoping to provide the patrol officers with an "option" other than writing a ticket. He was given five days off for "unethical interference" in an investigation and for violating the department's policy on honesty. Dusterhoft again appealed, but lost. In that case, the arbitrator found that Dusterhoft had clearly interfered with the patrol officers and then attempted to obfuscate when questioned about the incident.

Since taking on the APD's top-cop job, Acevedo has put a premium on officer honesty – and has not shied away from terminating officers for lying and not owning up to their failings. But in this case, Acevedo said he is not at all concerned about Dusterhoft's character or ability to lead. His run-ins with IA happened more than a decade ago, and since then he has grown into a model officer: He's received numerous commendations in nearly every position he's held in the department, and has distinguished himself as a leader. He recently earned praise for his efforts at reducing open-air drug dealing along the East Fifth Street corridor, and Acevedo said he made great progress in combating danger on Austin's roadways while heading up the Highway Enforcement Command. As such, Acevedo said that Dusterhoft's disciplinary past is easily "distinguished" from other cases involving questions of officer honesty. He said he doesn't believe what Dusterhoft did in the ticket-fixing case would, under current policy, even rise to an allegation of dishonesty. "Based on what I've seen, that doesn't rise to a sustained dishonesty allegation" that would be fatal under the APD's current policy, he said.

Also on April 24, the mayor of Chat­ta­nooga, Tenn., announced that he's chosen APD Commander Fred Fletcher to be the next chief of the small southeastern Ten­nessee city. According to the Chatta­nooga Times Free Press, Mayor Andy Berke said he picked Fletcher from among 77 applicants based on his "energy, passion, and experience reducing the drug trade and prostitution" in Austin. As commander of APD's Central East Austin Command, Fletcher was a key supporter of the Drug Market Intervention project designed by John Jay College of Criminal Justice professor David Kennedy, which APD, working with the Travis County D.A.'s office, deployed in the vicinity of East 12th and Chi­con, a generations-old open-air drug market. Fletcher championed the program and hit the streets with officers to – by all accounts, successfully – clean up "the Corner." The Chattanooga paper says that their city is working with Kennedy on a similar program.

Meanwhile, back at APD, Deaton has been tapped to take over Fletcher's role as supervisor of Austin's East Side policing operations.