Chubbing Republicans Over the Head 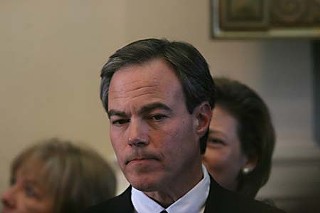 That's how long House members spent discussing each bill on the Local and Consent Calendar over the weekend. These bills normally go through on the nod, but Democrats were asking in-depth questions, using up every one of those 570 seconds on more than 200 items to block the contentious "hard photo" voter ID requirements in Senate Bill 362 from reaching the floor. The term is "chubbing": using as much time as possible to slow a bill down. As Rep. Dawnna Dukes, D-Austin, summed up the experience: "Well, the paint's dry."

The strategy was ultimately successful: Voter ID never made it to the floor, but it took a host of major bills, such as insurance reform, with it. It was a game of chicken: Republicans waving poll numbers showing that 70% of Texans support voter ID and calling Demo­crats obstructionists, and Democrats lambasting Republicans for pushing a voter-suppression agenda that did nothing to stop fraud but would block thousands of properly registered voters from casting ballots. It was the Republicans, they said, that created the problem by leaving too much major legislation until the end of the session, then putting a divisive voter ID bill ahead of all other pressing matters. The loser was whoever blinked before midnight on May 26 – the deadline for the House to pass Senate bills on second reading. Neither side blinked, bills died, and fingers were pointed.

In keeping with his management style, Speaker Joe Straus did not intervene dictatorially, instead looking to members to fix their own troubles. His role, he said, had been "encouraging conversations all week." But as Dems kept chubbing and Republicans rejected both compromise language for SB 362 and proposals to take up major issues such as the Healthy Texas Program out of order, the clock ticked down. "The pace is determined by how fast the Democrats want to go," said Republican Caucus Leader Larry Taylor, R-Friendswood.

So why did House Republicans play ball? For one thing, it's never been clear that they could win a floor vote on SB 362, and so they avoided a procedural showdown. Rep. Pete Gallego, D-Alpine, noted: "The truth is that we're 76-74, and the 76 know that they may be the 74 next time. They want the protection of the rules as badly as we want the protection of the rules right now."

The fight hurt both sides. House Demo­crat­ic Caucus Leader Jim Dunnam admitted that, with "74 type A personalities," there was debate within his caucus. But more seriously, both sides noted fractures between the Straus wing of the GOP caucus and supporters of former Speaker Tom Craddick. While Taylor claimed that his caucus was unified, moderate, and consensus-building, Repub­lic­ans faced pressure from multiple sources. The Repub­lic­an Party of Texas had sent e-mails to supporters, pressuring Elections Committee Chair Todd Smith, R-Euless, to reject compromise versions of the bill. When compromise was offered, Dunnam said, "The Craddick faction had said, 'No way, we're going to fight to the end of time.'" Straus was more diplomatic about Craddick's role and simply said, "I know he has been talking to a lot of members."

For all the closed-door negotiations, Dun­nam called it "a media war." That could explain why the GOP caucus hired Anthony Holm, a principal with right-wing communications company the Patriot Group and spokesman for Houston-area developer and big campaign donor Bob Perry, as a consultant. When Rep. Tommy Merritt, R-Longview, tried to talk to the media, he was yelled down in front of the press corps by a group of hard-liners including Reps. Dennis Bonnen, Charlie Howard, and Charles "Doc" Anderson. His sin? Daring to suggest their caucus wasn't totally unified.

There's little doubt that both sides will use the chub in the next election – the GOP is already preparing. On May 24, Republican Party of Texas Chair Tina Benkiser sent an e-mail blast to supporters telling them to call a list of 11 Dem­o­crats – including Austin's Valinda Bolton and Round Rock's Diana Maldonado – and remind them that Republicans "will remember their vote next election day."

Across the dome, senators struggled to save some bills, but Gallego argued that the chubbing was really their fault for passing SB 362. "It was unfortunate that the Senate started this the way that they did early on in the session [and had] not thought out the implications in the House," he said. Straus had his own response to comments from Lt. Gov. David Dewhurst about the big bills stacking up in the House. Noting that, unlike the Senate, his members had voted their draft budget out unanimously, he added, "To say that we haven't addressed these issues is something that someone who hasn't served in the House may be tempted to say."

Ultimately the legislative agendas of both parties took a hit: Voter ID never made it to the floor, but neither did unemployment insurance reform. Yet some significant legislation – like top 10% reform – made it through the crush. As for pending business, Gov. Rick Perry has already threatened a special session if windstorm insurance reform isn't completed to his satisfaction, and Taylor said that, with some federal stimulus regulations up in the air, the budget may be back on the table this summer. Dunnam even found an upside to the chub: "Republicans have been coming up to me and saying: 'We probably ought to be talking about these local bills a little more. I didn't realize some of the stuff that we're doing.'"