Tweet
print
write a letter
With the arrival of the first wave of Texas Assessment of Knowledge and Skills scores, the fates of Reagan High School and Pearce Middle School stand on a knife edge. And based on these preliminary numbers, Austin Independent School District officials believe Reagan may survive, while Pearce's best hope lies with the Legislature.

Districtwide, the early results show measurable improvement for all student groups in the four core subject areas. Both schools have improved their test scores – but the school accountability system requires absolute achievement, not growth. Reagan is in its third year of classification as "academically unacceptable" and is trying to avoid a fourth. "Was there enough progress? Frankly, it will be close," said AISD spokesman Andy Welch. The outlook for Pearce, now in year four and facing mandatory repurposing, is gloomier. "It appears from the data of the student test scores, without being able to apply the other elements of the accountability system, that Pearce does not meet either the state or the district's expectations," Welch said guardedly.

Reporting continues until results for the second administration of the math test arrive on June 8, and even then, other criteria enter in, such as attendance, dropout, and graduation rates. But AISD has started contingency planning for both schools: On May 18, trustees were briefed on student reassignment and boundary realignment options in the event Pearce closes. Ultimately, the decision will lie with Texas Education Commissioner Robert Scott. While the final accountability statistics are not released until August, the district could get an early heads-up on the commissioner's plans. Last June, Scott notified AISD of his plan to close Johnston High, giving trustees a head start on repurposing the campus into what would become Eastside Memorial.

Pearce's best chance of survival is inked into the accountability reforms the Legislature is currently considering in House Bill 3, which include a one-year extension period for endangered schools and immediate introduction of the new assessment criteria. "It's the job of the district and the students and the community to get test scores up, and it's our job here on Capitol Hill to make sure we pass that bill," said state Rep. Dawnna Dukes, whose East Austin district includes Pearce and Reagan.

Even if HB 3 passes unscathed, there's still the risk of the governor's veto. House Public Education Committee Chair Rob Eissler said that he expected a continuing discussion with Scott on the grace period, "But I know the governor's not real happy about that." 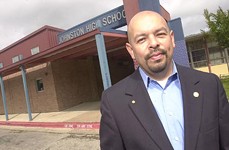