pdf
ON THE COVER:
Nathaniel and Li'l Nate
news

The two lives and untimely death of Nathaniel Sanders II

How can we best honor those who have died in our names?

Chubbing Republicans Over the Head

Pearce's best chance of survival lies with the Legislature

Fruits of Their Labor

How labor-related bills have fared this session

UT has big plans for its West Austin property

What are the holidays without that special twinkle at Zilker?

TXI Mines Another Headache for Webberville

Residents don't want a gravel mine in the neighborhood

Take the Tax Money and Run; and The Supreme Court Scorecard

Cooking Dirty: A Story of Life, Sex, Love, and Death in the Kitchen

Milk: The Surprising Story of Milk Through the Ages, With 120 Adventurous Recipes That Explore the Riches of Our First Food

Almost 400 pages about milk? Yes, indeed, and it's all fascinating.

An opulently illustrated, annotated glimpse into the Darwin family's diet

The corruption of our food supply, described in language any parent can understand

This modest, self-published cookbook preserves a lifetime of recipes

Chocolate: Pathway to the Gods: The Sacred Realm of Chocolate in Mesoamerica

Jam It, Pickle It, Cure It: And Other Cooking Projects

Learn to impress family and friends with your kitchen crafts

Shark's Fin and Sichuan Pepper: A Sweet-Sour Memoir of Eating in China

Cooking Up a Storm: Recipes Lost and Found From the Times-Picayune of New Orleans

Restoring the culinary legacy of America's most food-oriented city

Heard It Through the Grapevine: The Things You Should Know to Enjoy Wine

Absorb one page of this book a day, and soon you'll be quite the wine expert

Passion on the Vine: A Memoir of Food, Wine, and Family in the Heart of Italy

A confessional about life, love, discovery, and the powerful draw of culture

Jeffrey's revitalizes its classics, and El Chile continues to expand 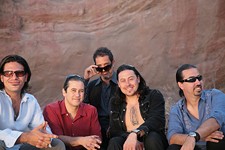 A fond send-off for D-Madness, stuffing the piñata for the second annual Pachanga Latino Music Festival, Hayes Carll helps rebuild the Crystal Beach, and roaming the Flatladers' Hills and Valleys

Director Pete Docter on the intersection of uplift and melancholy

Richard Linklater's 'Inning by Inning: A Portrait of a Coach' debuts on DVD

Adrien Brody and Mark Ruffalo are cast as the best con men in the world whose current swindle involves an eccentric heiress (Rachel Weisz) in this sophomore effort by the writer/director of Brick.

The next generation of the Wayans clan delivers one more spoof – this time of dance movies.

Drag Me to Hell

Sam Raimi makes a triumphant return to the "splatstick" horror genre he more or less invented with The Evil Dead and its two sequels.

Night at the Museum: Battle of the Smithsonian

In this comedy sequel, the CG action moves to Washington, D.C., as the Smithsonian's exhibits are put into storage during a renovation.

The objective of this documentary by Kirby Dick is to out closeted gay and lesbian policymakers, whose hypocrisy harms the GLBT community.

Mike Tyson tells his life story in his own words in this documentary by longtime friend James Toback.

Pixar tops itself with its new animated film that offers so much more than its promotional promise of a fantastical movie about a house that flies on balloon power.
arts & culture

The 2009 class of the Austin Arts Hall of Fame

'In the Can With Martha Kelly'

Kelly's homegrown talk show, whether online or live, is refreshingly candid and funny

Beth Burns' play has the seed of a unique love story, but it still needs developing

Repetition isn't always good or funny, but in this show, it can change your point of view
columns

From creationism to red-baiting, the right kicks it old school

Gay Standard Time and getting pumped for Pride

Stephen goes to Galveston only to be pwned by a bicycle

T.J. Mabrey is dedicated to bringing an appreciation of art to Lampasas

Deferred Adjudication – How Long Will It Stay on My Record?