One win, one loss

Tweet
print
write a letter
After nearly two weeks of serious nail biting, reproductive health-care advocates are breathing a (half) sigh of relief: On May 19, they learned that budget conferees left alone the funding allocation scheme for more than $40 million designated for family-planning health services that provide basic health care for thousands of poor and uninsured women.

The relief is only partial, because lawmakers also decided to allocate an additional $3 million over the biennium, taken from general revenue, to beef up funding for the Alternat­ives to Abortion program – the so-called "crisis pregnancy centers" the Lege created in 2005, unregulated entities that provide no medical services but instead "promote childbirth." The program is currently funded with $2.5 million per year taken from the family-planning budget. The proposed increase would represent a 60% budget hike over the current biennium.

Why the program needs the increase in funding isn't at all clear. The entity that administers the program, the Texas Pregnancy Care Network (which formed nearly four years ago to take advantage of the new funding opportunity), has been unable to spend the entire $2.5 million currently allocated to the program each year on actual services to clients. In fact, TPCN has consistently failed to meet its own goals – for the number of individual crisis pregnancy centers that would contract with the state to provide services, for example, and for the number of clients actually served. The group has, however, done a nice job of spending cash on administrative expenses: Roughly 40% of the entire budget has been spent that way, including generous pay raises for TPCN's executive director, attorney Vincent Friede­wald, whose pay rose from $93,372 in 2007 to more than $100,000 in 2009. (For more on TPCN and the abortion alternatives program, see "No Real Alternative," Jan. 26, 2007.)

While lawmakers in both chambers must first approve the compromised budget and Gov. Rick Perry must then sign off, it seems safe to bet that Friedewald will be getting another pay bump in September.

Nonetheless, the overall family-planning budget not only remains intact but will see a $7.2 million increase to cover costs associated with Medicaid – including an increase in the reimbursement rate for oral contraceptives, which will rise from the paltry $2.80 per pack to $20.88 each. 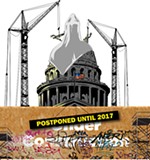 What's the Damage?: Fallout From the 84th Texas Legislative Session
The news staff takes a look at the fallout from the 84th legislative session