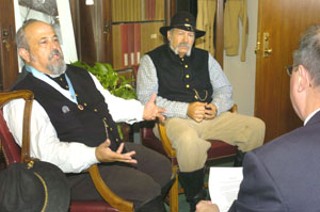 Steven von Roeder (l) and Terry Ayers of the Texas Division of the Sons of Confederate Veterans present their resolution to UT's Deputy to the President Charles Roeckle. (Photo By John Anderson)

Kevin Miller is so 1863. His dun-colored jacket is woven of coarse wool. Its buttons are wooden, and its sleeves have a delicate puff. As he stood before the grave of Confederate Gen. Albert Sidney Johnston in the Texas State Cemetery last week, he explained that his uniform was exactly what his great-great grandfather John Rufus Eddins would have worn while defending his homeland in the Confederate Army.

And Miller's dang proud of it: He was one of about a dozen Sons of Confederate Veterans who gathered on Veteran's Day to oppose a possible shuffling of the statuary on the UT campus – and to correct misinformation about themselves and their ancestors. "We're not attempting to minimize slavery in any way, but we want people to look into the truth of it," said Miller. "There were decent people on both sides."

Miller removed his hat as the group's ceremony began with a prayer, then listened to Division Commander Steven von Roeder read the statement he would subsequently deliver to UT President Larry Faulkner. "The Texas Division of the Sons of Confederate Veterans does oppose any relocation of the statues or memorial by the University of Texas at Austin unless such relocations will cause the statues to be featured more prominently," von Roeder said.

This summer, as part of a response to a UT task force on Racial Respect and Fairness, Faulkner suggested moving statues of several Confederate leaders off the heavily trafficked South Mall. In what sure looks like an attempt to have it both ways, Faulkner claims the move isn't about diversity as much as it is about realizing the original intent of the statues' creator. Nevertheless, diversity of bronze faces on campus has been a hot topic all year – the university is planning new statues of Barbara Jordan and Cesar Chavez – even as coming legislative battles over the Top 10% admissions plan threaten to decrease diversity among the flesh-and-blood faces.

The Sons say they're not opposed to diversity – in their statement, they "heartily" endorse it. However, they say it's also important to honor their ancestors, whom they consider good people who lived in tragic times. "Those boys were just fighting for their homes," said Blayne Parsley, who with his slouch hat, Play-Doh features, and manic grin resembles a long-lost, Confederate ancestor of Steve Buscemi. "And they did great things when they came home."

"I really think that the Confederate States were founded on the principle of brotherly love, and would have freed the slaves voluntarily," added Miller. "A lot of people in the South had a real passion for ending slavery." He added that "what-ifs" aside, honoring fallen Confederates does not mean looking longingly to a less-enlightened past. "We're not here to say we wish the Confederacy existed right now," he said. "We're reconciled with the way things are."

Parsley looked around with a grin at his wool-suited brethren. "Well, some of us are reconciled," he said. 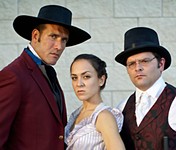