Breaking news from Austin and beyond. 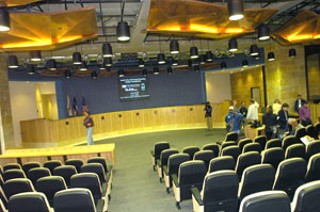 Austin unveiled its new City Hall this week, and the official grand opening party is this Saturday. For more on the city government's new digs, see "Your Beautiful New Home." (Photo By John Anderson)

Quote of the Week: "We're not here to say we wish the Confederacy existed right now. We're reconciled with the way things are." – Sons of Confederate Veterans member Kevin Miller. The group this week petitioned UT to not relocate statues of Confederate heroes from the campus' South Mall; see "Confederacy of Love."

As the Bushies drop like flies, the City Council candidates gather like ants; as of this writing, Lee Leffingwell, Margot Clarke, Mandy Dealey, Jeff Trigger, Gregg Knaupe, Jennifer Kim, and Steven Adams are all in the running for the empty seats of Daryl Slusher and Jackie Goodman, six months from now. See "Austin at Large: Which Way Did We Go?."

The new City Hall faces will, of course, have a new City Hall to be faces in; the long-awaited structure's grand opening is this weekend. See "Your Beautiful New Home."

As growth battles rage on in the Hill Country, a first draft of a collaborative regional water quality plan is now public; see "Water Flows Downhill."

For now, at least, the U.S. Supreme Court is still appalled by Texas justice, overturning yet another death penalty verdict. See "Supremes: What'd We Say?.'

Naked City hears that some time very soon, like today or tomorrow, the 20-page-or-so executive summary of the Mueller master development agreement between the city and Catellus Development will be exposed to public scrutiny on the city Web site (www.cityofaustin.org). This précis of "frequently asked questions" about the long-in-the-making deal to reinvent the old airport will pave the way for consideration of the full MDA – which may top 1,000 pages – by community, commissions, and City Council in the coming weeks. Stay tuned. – M.C.M.

The Save Our Springs Alliance is in court this week arguing against the Lazy 9 Municipal Utility District in western Travis Co. The MUD was created in the 2003 legislative session to help facilitate the development of a large swath of Hill Country property along Texas 71 West, in the Bee Creek watershed. The planned subdivision is one of several development projects slated to take shape in pristine rural areas west of Austin. The trial started Monday in Travis Co. district court and is expected to last most of the week. – Amy Smith

On today's (Thursday) City Council agenda is an item to possibly award a contract to manage a city-owned landfill on FM 812 near Onion Creek to IESI Corp., a move supported by city staff but opposed by Texas Campaign for the Environment, a group that has been very active on landfill issues. TCE charges that IESI has a poor record on landfill management, while IESI says it gets good marks from the Texas Commission on Environmental Quality. Last week, the city's Solid Waste Advisory Commission advised against awarding the contract. According to online political newsletter In Fact Daily, SWAC commissioner Rosemary Wyman said, "There's no question in my mind that Solid Waste Services knows more about that landfill than anybody else. So if Solid Waste Services can't make that landfill operate in an economically feasible fashion and in an environmental fashion, why would we want to outsource this problem to someone else? If we can't solve it, then maybe we should close the landfill." – Lee Nichols

In the local battle between upstart talk show host Jane Pauley and Oprah, Pauley is officially toast. Just a few days into the November ratings sweeps period, NBC affiliate KXAN abruptly pulled Pauley's new talk show from the 4pm slot and replaced it with a half-hour newscast and the syndicated show Access Hollywood. "We all had great hopes that Jane Pauley would be a good addition for 4pm, but it hasn't turned out as such," says KXAN general manager Carlos Fernandez. It was decided to give the newsroom "first crack" at fighting the Oprah monster, Fernandez says; newsroom staffers weren't officially informed about the new newscast until a week before it went on the air. Pauley's show was banished to an 11am slot, facing Dharma and Greg reruns and soap operas for the morning audience that may remember her fondly from her days on Today. – Kevin Brass

The Women's Advocacy Project, a statewide nonprofit legal organization based in Austin, netted more than $65,000 at its annual fundraiser gala Friday, which drew a crowd of politicos and advocates to the Austin Renaissance Hotel. Proceeds go to legal services for domestic violence victims. The event paid special tribute to Stewart Gagnon, for his work as chairman of the Texas Supreme Court's Protective Order Task Force. "We will make Texas the leader in stopping domestic violence," said Susan Zachos, chair of the Project's board of directors. "The time is right and the Women's Advocacy Project is exactly the organization to take this on." – A.S.

A UT committee composed of professors, administrators, and students on Tuesday recommended increasing undergraduate tuition 4.75% and adopting a flat-rate tuition policy for all undergraduates starting next fall. Currently only the Colleges of Natural Sciences and Liberal Arts have flat-rate policies, which officials say serve as an incentive to take more hours, and thus to graduate faster and reduce enrollment. But many complain the policy penalizes students who have to work to pay their rent (or chip in for the keg). Even with the 4.75% increase, officials expect to come up about $30 million short for UT's projected 2005-06 expenses. Since budgetary shortfalls do not help promote the "disciplined culture of excellence" to which UT (loudly) aspires, expect some generous "informational advocacy" – since "lobbying" by a state agency is illegal – for more state funds down at the Capitol come January. If you fear the proposal will do grave harm to your textbook budget (or keg fund), be sure to show up at one of the public hearings scheduled Nov. 19 and 30. Details at www.utexas.edu/news/tuition. – Rachel Proctor May

Comptroller Carole Keeton Strayhorn announced again that there's no dang reason to start school before Labor Day. In fact, she says early school start dates cost the Texas economy $790 million each year. She plans to tell the 79th Legislature to move the first day of school back into September, and is looking for feedback on how to shorten the school year without losing instructional days. Come on, folks, help the lady out: Take her early school start survey at www.window.state.tx.us/survey/schoolstart. – R.P.M.

How do you reward a Weatherford car dealer who raised nearly $400,000 for the Bush presidential campaign? Why not make him Texas secretary of state? That was the Capitol buzz over the weekend, as Gov. Rick Perry somehow let it leak that Roger Williams of "Roger Williams Chrysler/Dodge/Jeep/Sprinter/Airstream" in Weatherford, a Bush "Super-Ranger," was the pick to replace Geoffrey Connor – before it became official that Connor is stepping down. There was a flurry of public harrumphing and face-saving, as Connor said he had told Perry of his intentions a few months ago and Perry congratulated him for a job well done, and Williams said he would be "happy to serve." The 55-year-old Williams played baseball for TCU and in the Atlanta Braves system; his appointment's subject to Senate confirmation. – Michael King

From the Dept. of Mixed Messages: Unlike former Gov. George W. Bush, who indignantly and condescendingly assured the nation back in 2000 that the Lone Star State had never executed an innocent person, 70% of Texans polled last month as part of the annual Texas Poll believe that the state has executed innocent people. Nonetheless, 52% of the 1,000 people polled said they oppose a temporary moratorium; 75% said they support imposing the death penalty. – Jordan Smith

Attorney General John Ashcroft is on his way out the door, but not without first uttering a few choice comments that, once again, call into question his grasp of the law in a democratic society. On Nov. 13, giving a speech to members of the conservative Federalist Society, Ashcroft said he finds "profoundly disturbing" recent judicial rulings that challenge the Bush team's anti-terrorism strategies. Last week a federal judge halted the tribunal of Salim Ahmed Hamdan – reportedly Osama bin Laden's former driver – by questioning the White House's efforts to deny POW status to detainees at Guantanamo. Such judicial challenges to the president's powers during "wartime" are both "dangerous and constitutionally questionable," Herr Ashcroft said. And since the "war on terrorism" is permanent, it's about time those judges get the message that such niceties as due process and presumption of innocence are relics of a "quainter" time – to use the words of Ashcroft's successor-in-waiting, White House counsel Alberto Gonzales. – J.S.

More fun with election numbers, this time on a statewide level: Total Texas turnout in the presidential election was 56.4% of registered voters. The turnout extremes were both in sparsely populated West Texas counties – Borden (near Lubbock) got 78.9% of its voters to the polls (and Bush won 303-55), but Swisher (location of the infamous Tulia drug raids) only saw 28.3% turnout (with Bush winning 916-407). Best turnout in the state's urban counties came in Collin (Plano and environs) with 65.8%, which not surprisingly went overwhelmingly for Bush; worst was in Cameron (Brownsville, Harlingen, etc), which saw only 42.4% turnout (and went solidly for Kerry). While the Dallas suburbs love Bush, Dallas Co. itself, once a Republican stronghold, almost went for Kerry (he took 49%) thanks to changing demographics. Expect Dallas to be colored blue in 2008, if not sooner. – L.N.

Saturday, Nov. 20, is the second annual Austin Unchained Day, an event sponsored by the Austin Independent Business Alliance, which urges you to do all your shopping that day only at locally owned independent retailers. Such an effort, says AIBA, will pump an extra $14 million into the local economy just in one day. Following Austin's lead, Unchained Day has become a national event, sponsored by the American Business Alliance, and will be observed Saturday in locales including Phoenix, Albuquerque, Tampa, and Colorado Springs. More info at www.shopaustin.org.

On Nov. 19-20, La Peña Gallery (227 Congress) will present Women and Fair Trade, offering a wide range of products and speakers; participants include women who have organized cooperatives to replace income lost through unemployment in their countries. Friday, 2-8pm; Saturday, 11am-8pm.

Transgendered victims of violence will be remembered in a candlelight vigil at 6:30pm Saturday in Republic Square Park, 422 Guadalupe. The event is part of the internationally coordinated Sixth Annual Transgender Day of Remembrance, which will take place in more than 90 cities worldwide. This will be the third year for Austin's participation. At least 11 transgendered individuals have been murdered this year in the U.S. and its territories, according to the Lesbian/Gay Rights Lobby of Texas, one of several co-sponsors of the event. For more info, go to www.gender.org/remember/day/index.html.

School of the Americas Watch-Austin is sponsoring a trip this weekend, Nov. 19-22, to the annual protest at Fort Benning, Ga. – longtime home of the School of the Americas (renamed the Western Hemisphere Institute for Security Cooperation) where training in torture techniques and "low intensity conflict" has occurred for decades. For info about the trip visit www.soaw-austin.org/Vigil.html or contact soaw_austin@yahoo.com or 272-4065.