TAKS Scores Show Both Improvement and Trouble for AISD

Numbers down for the crucial third and 11th grades 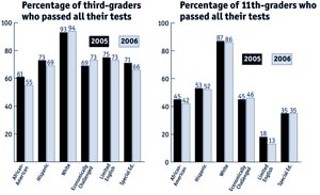 Take 80,000 students in six different racial and socioeconomic categories, test them in up to five subjects each, and what do you get? Numbers. Lots of 'em. This week the Texas Education Agency released the results of this year's Texas Assessment of Knowledge and Skills tests, which determine which students graduate or advance a grade, and are the basis of school ratings under both a state system and the federal one known as No Child Left Behind. AISD's scores show areas of both growth and decline, and while the district likes to highlight the former, the latter also raise troubling questions.

Texas students take TAKS tests in language arts, math, science, and social studies. The system separately measures performance of students who are African-American, white, Hispanic, limited-English, special education, or economically disadvantaged. This allows districts to pinpoint which students are failing and what subjects are giving them the most trouble, but it also allows the data to be sliced and diced fancier than a daikon radish at a sushi counter.

In publicizing their scores, AISD drew attention to student improvement over the three years since TAKS replaced the previous testing system. Since 2003, the percentage of students passing all their tests has increased in each grade, with increases of more than 15 percentage points in six grades. This is despite the fact that the number of questions students need to answer correctly in order to pass increases each year. It is also promising that the achievement gap, which shows African-American and Hispanic students lagging their white and Asian peers, also narrowed slightly in many grades.

While AISD is making progress, the passing rate as a whole remains far from exemplary. Only 50% of eighth-graders passed all their tests, which is the lowest passing rate of any grade; among third-graders, who had the highest passing rate, one in five failed at least one test. More troublesome are the grades in which areas of decline outnumbered areas of growth. Although the third-grade passing rates of 92% for language arts and 77% for math are the highest of any grade level, they're lower than last year's scores. The same is true in 11th grade, where math and science scores declined, language arts stayed flat, and only social studies increased.

"We've just got to dig in there and figure out where we need to make some changes," said Ann Smisko, assistant superintendent of curriculum and instruction. In particular, she said the third-grade scores pointed to the need for better pre-kindergarten instruction to meet the growing percentage of AISD students – currently about 60% – who come from low-income backgrounds.

Third and 11th grades are significant because they're two grades where students must pass to be promoted to the next grade or to graduate. Last year, 1.5% of the third-grade class, or about 100 students, were held back because of TAKS scores. About 1,300 juniors, or 35% of the class, will have four chances to retake the test in order to graduate next May. These students are disproportionately low-income and minority: Only 42% of African-American 11th-graders and 52% of Hispanics have passed all their tests. Students with limited English proficiency are really hurting: Only 13% have passed all their tests.

If the students don't pass their tests before next May, they'll have another chance the summer after their would-be graduation, and anyone can keep trying as long as it takes. About 400 current seniors are in that boat. However, many simply give up: Of the 292 seniors who did not graduate last May because of TAKS scores, only 60 passed the necessary tests over the summer. This gives critics of the testing system one more thing to critique: When one in five AISD students already doesn't earn a diploma in four years, that exit-test provides one more reason for struggling students to drift away.

When students throughout the state are struggling, and 11% of the would-be graduating class statewide does not pass, some also charge that those held accountable should include not only local districts, but the state school finance system that many believe inadequately funds the schools.

"We recognize that we still have a good deal of room for improvement," said AISD superintendent Pat Forgione in a statement. "We won't be satisfied until every student achieves at high levels – and that will take additional financial support and investment."