Hoping to reach middle-schoolers who could go off track in a regular school setting, district moves forward with charter school plans 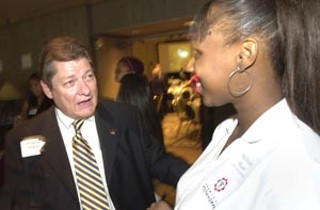 This summer, 21-year-old Melinda Shaw will finally graduate from high school. The slender, ponytailed African-American dropped out of school at 17 when she got pregnant; with her second baby on the way, she decided it was time to finish up her last five credits and develop a career at Austin Community College. To get her diploma, however, she didn't head back to Austin ISD, but to American YouthWorks, a self-paced charter school that serves 550 students at two campuses in Austin.

"You can work at your own level and can get done faster if you stay focused," said Shaw, adding "There's more support. More counselors, people who care."

Austinites may start hearing a lot more about American YouthWorks. The Austin ISD Board of Trustees recently passed a resolution authorizing the creation of an in-district charter school managed by AYW. While the plan is contingent on AYW developing a final proposal that satisfies the district, the resolution enables AISD and AYW to secure a three-year, $500,000 start-up grant the Texas Education Agency has reserved for the project. By approving the resolution, the district has moved a further step along the path to a promised "portfolio" of school choices it hopes can meet the needs of Austin's diverse student population.

"[The resolution] means that everybody believes this is a great idea," said AISD attorney Mel Waxler. "It means everybody wants to do it and sees a fundamental need to do it but that not all questions have been resolved to make it 100% certain that we can do it."

According to director Richard Halpin, AYW first approached AISD two years ago, after AYW received a $250,000 grant from the National Council of La Raza to design an "innovative" middle school. If AISD and AYW solve a few outstanding issues – primarily, funding and facilities – the school will open in August 2007 with 200 sixth- and seventh-graders. It will be a "district charter school," a hybrid managed by American Youthworks under the financial umbrella of the district. It will follow most AISD policies but will have more curriculum flexibility than other AISD schools, and it will be able to independently raise funds. At a time when AISD is turning increased attention to middle school, trustee Mark Williams said the proposal seemed like a "great opportunity."

"It's in middle school where a lot of kids are getting off track, and we spend a lot of time in high school remediating them," Williams said.

AYW hopes to reach middle-schoolers who could go off track in a regular school setting through a combination of hands-on learning, community engagement, and a curriculum tied to real-life Austin issues: neighborhood history, local entrepreneurship, gentrification, and so on. In designing the school, AYW will bring 30 years of experience working with at-risk kids and nearly a decade of running its two charter high schools, which are "recovery" programs for dropouts and near-dropouts. The schools mix academic and vocational learning; AYW high schoolers participate in programs like Computer Corps, where they learn to maintain computers, and Casa Verde Builders, where they build energy-efficient affordable housing half the day and hit the books the other half.

AYW has earned praise for giving students a second chance – the Gates Foundation just named it one of the 10 best redesigned high schools in Texas, for example. The school is floundering in the accountability game, however. Both AYW campuses failed to meet federal accountability targets under No Child Left Behind last year, when only 17% of AYW students passed all their TAKS tests. (For AISD as a whole, the rate is 59%.)

Halpin points out that the only students his school serves are those who were already failing in their previous schools. They are also among the most challenged in Austin: the teen parents, the homeless, the formerly incarcerated. "By the time I get them, they're often three to four grades behind their peers," he said. "I have to give them a TAKS test at the credit level they present themselves."

In fact, he argues that's just the reason AYW should try a middle school – so it can reach more students before they mentally check out. Shaw, who grew up bouncing from foster home to foster home, and who will be the only one of her six siblings to earn a diploma, said her troubles started in middle school. "It was tough," she recalled. "I started skipping a lot when I was in eighth grade."

But why partner with AISD? For Susan Dawson of the AYW board, the point is to fulfill the original vision of charter schools as testing grounds for new educational models that can then be adopted by public school districts. "How can we be the lab for AISD and other districts to take back into the schools?" Dawson asked. "Part of the goal for me is to make the second part of the [charter school] model work better than it ever has."

Even if the AYW program works wonders, however, one hurdle stands in the way of widespread application: money. Halpin expects to spend about $12,000 per student per year – about double the AISD average – which will come from private donations, grants, and increased state appropriations for at-risk students. Halpin points out the figure is comparable to what AISD spends at Garza, its alternative high school. "We expect to spend what the real cost of at-promise kids is, which is 12 grand," he said.

Nevertheless, if the idea is to create something easily replicable, it's going to be hard to swing expensive key ingredients, such as low student-teacher ratios. AISD and AYW also have yet to come up with a place to house the school. The closure of Porter Middle School this spring to make way for a science-focused girls' school shows AISD's willingness to replace existing offerings with something the district believes is better. (The battle over the proposal, on the other hand, showed AISD's vision of "better" is not always universally shared.) Superintendent Pat Forgione has made it clear he hopes to steer AISD toward a diverse "portfolio" of school choices, and within that context, trustee Williams says this is probably not the last time an outside group will approach AISD with an idea.

"It seems we should do anything we can to give a difference in offerings and choice for kids who might not be successful in comprehensive schools," he said. "If we're successful implementing the ones coming to us, I believe more will come our way."