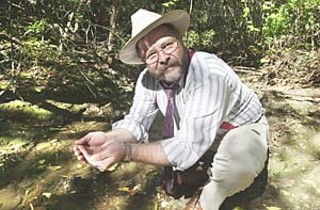 A South Austin neighborhood leader credits good science and good organizing efforts for winning a number of environmental and design concessions after months of arm wrestling with the world's largest retailer.

Barring any last-minute snafus, a Wal-Mart Supercenter development will have the official blessing of the South River City Citizens group today (Thursday) when the City Council considers final action on a proposed zoning change at the Ben White site. SRCC saw much at stake in the Wal-Mart struggle, given the proposed development's proximity to the headwaters of Blunn Creek -- a Travis Heights neighborhood jewel and one of the cleanest waterways in Austin. "If we hadn't obtained the data [on the creek] and gotten organized, we wouldn't have been able to have a good-faith dialogue with Wal-Mart," said SRCC President Tim Mahoney.

Neighborhood residents pooled their financial resources to retain the environmental firm of Glenrose Engineering to assess the current state of the creek and to suggest structural controls that would prevent the megastore from polluting the creek. Wal-Mart balked, then blinked.

Earlier this week, Mahoney said there were still some last-minute issues to be hammered out before today's council meeting. The neighborhood, for example, wants Wal-Mart to maintain performance bonds to ensure the project complies with the terms of the agreement. He also said that monitoring and enforcement criteria were still being hashed out.

The tide of neighborhood resistance against Wal-Mart started to turn last Wednesday, when Wal-Mart attorney Richard Suttle sent a letter to Mahoney outlining a series of concessions, including: water quality treatment for about 109,000 cubic feet of storm water (some 25% more than the current code requirement), installation of a rainwater harvesting system, native plant landscaping, neighborhood and environmentally friendly lighting, skylights, and other energy-conservation measures. Wal-Mart also says it won't sell or use coal tar-based sealants, which contain carcinogenic matter found in some of Austin's waterways.

"Our engineers said these measures would save the creek," Mahoney said. "There still are some design issues to be discussed, but right now we're more concerned about getting structural measures in place to protect the creek."