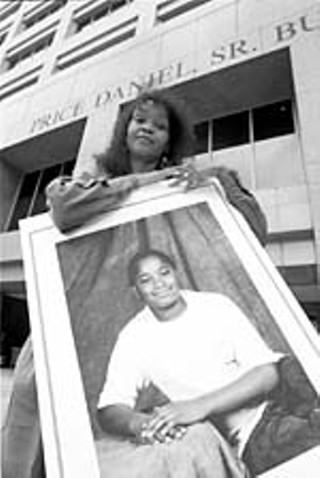 Barbara Taft, a supporter of Lacresha Murray, holds a picture of Murray at a 1998 protest. (Photo By Jana Birchum)

On Dec. 2, federal District Judge Sam Sparks declined to dismiss the lawsuit brought against local authorities by former capital murder defendant Lacresha Murray. Sparks ruled that there is sufficient evidence that Travis Co. prosecutors and APD investigators in 1996 may have conspired to violate Murray's Fifth Amendment rights to allow the case to go to trial.

In 1996, 11-year-old Lacresha Murray was convicted of "injury to a child" for the death of 2-year-old Jayla Belton. Prosecutors claimed Murray stomped on Belton at the Northeast Austin home of Murray's grandparents, where the Murray family was babysitting the toddler. In 1999, the 3rd Court of Appeals overturned Murray's conviction, on the grounds that police had illegally obtained a confession from Murray. Indeed, APD detectives Ernie Pedraza and Al Eells interrogated Murray for 21/2 hours without the knowledge or consent of her guardians, without contacting an attorney to represent her, and without taking her before a magistrate, as apparently required by state law. Murray was finally released from the Texas Youth Commission in 2000, and in 2001 Travis Co. District Attorney Ronnie Earle dropped all the charges against her (see "Justice Denied?" Aug. 7, 1998).

Last year Murray filed suit in federal court for a host of violations, including a charge that prosecutors Stephanie Emmons and Dayna Blazley, along with Pedraza, Eells, and Sgt. Hector Reveles, conspired to conduct her interrogation in a manner that they knew would violate her Fifth Amendment rights. While most of Murray's original claims have been dismissed, Sparks last week denied part of a motion for summary judgment brought by attorneys for the prosecutors and police, ruling that there is enough evidence to proceed with Murray's Fifth Amendment claims -- giving the defendants a chance to prove that they acted in "good faith," he wrote. In his ruling, Sparks pointed to a memo written by Reveles, in which the officer wrote that Murray's interrogation "was conducted with the full knowledge, advice and guidance from the Travis County DA's Office" -- an admission the judge found telling. "The interrogating officers knew ... Murray was a suspect in the murder, and the evidence suggests the officers sought the advice of prosecutors to figure out what steps they could take to interview her out of the presence of a lawyer, parent or other friendly adult to guarantee a confession."

On Dec. 4, attorneys for the police and prosecutors appealed Sparks' ruling to the 5th U.S. Circuit Court of Appeals, indefinitely postponing the trial, which Sparks had set to begin Dec. 8.