And about that regional plan …? 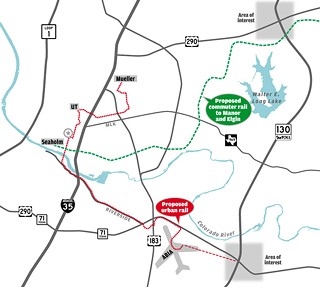 The State Facilities Commission is looking at properties at these two major intersections along SH 130, one of which could be the future site of a state office campus.

A shining New Urbanist outpost: "a state-of-the-art, sustainable government campus that's among the best of its kind in the country."

That's the vision portrayed by Edward Johnson, executive director of the Texas Facil­ities Commission, for a new state campus that would consolidate offices currently spread out in leased space all over Travis County. Building a campus would allow the state to stop renting (about 2 million square feet, at more than $30 million a year) and instead build itself a dream home, which Johnson says would supplement (not reduce or replace) the Capitol Complex Downtown and allow for long-term state office expansion.

The director, passionate about the project's potential to serve the public good, has developed detailed projections for a campus serving 9,000 employees, master-planned to accommodate the state's growth far into the future. At up to 300 acres, it would include retail, restaurants, work-force housing, top-notch child care, recreational green space, well-designed architecture, and streetscapes – all adding up, at least in conception, to a dense, walkable complex, including complementary adjacent development, served by good mass transit.

It looks likely that the current legislative session will end without the project receiving budget appropriation, but Johnson remains optimistic that the project can still move forward, perhaps this year. He sees potential for the Texas Facilities Commission to self-finance it by liquidating unneeded real-estate assets, diverting cash flow now devoted to lease-space payments, and earning income from complementary development on a large site. 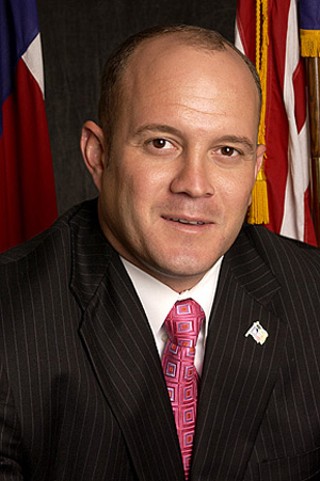 Johnson said he's shopped the basic concept around to multiple local stakeholders and that it's received "overwhelming" positive support. What it hasn't received is a thorough regional vetting for its impact on land-use and transportation planning; Johnson and his staff have been focused on the logistics, fiscal issues, and the politics of simply getting the basic consolidation concept to fly. They've also been searching for a site. In January, the state issued a Request for Offers seeking to acquire a large property in eastern Travis Co., within Austin's desired development zone, to be master-planned for the campus. The search has focused on raw "greenfield" sites along State Highway 130, particularly near the intersections of either U.S. 290 or Highway 71. Rumors have been flying that the TFC has already picked a site and that "brother-in-law" interests may have driven the selection; Johnson insists that no site has yet been chosen and that the decision will be made only on the merits of the site.

By locating a dense concentration of workers (now scattered at locations throughout Travis County) at a single site, the project, if well-located, could help regional mobility and public transportation, as well, by delivering ridership to rail transit. According to Glenn Gadbois of Alliance for Public Transportation, some transit advocates would prefer a site on the U.S. 290 East corridor, already scheduled for a nearly $600 million Manor Express­way toll road, and where it would also help justify Green Line commuter rail service (on existing Capital Metro-owned track from Austin to Manor and Elgin). The Green Line has been approved in concept by the Transit Working Group of the Capital Area Metro­pol­itan Planning Organization, has a financing proposal coming forward soon, and thus likely will be in the 2035 CAMPO long-range plan. That plan – to be publicly aired in the fall for adoption next year – incorporates an "alternative growth concept" informed by the preferred model from Envision Central Texas, which would encourage denser land development in "activity centers" along major road-and-transit corridors. CAMPO Executive Director Joe Cantalupo said he wasn't yet familiar with the state campus concept, but "we'd like to learn as much about it as we can, as we're developing the 2035 plan."

As an alternative to U.S. 290, siting a huge new state campus near Highway 71 (a few miles beyond Austin-Bergstrom International Airport) could advance a different mobility goal – additional ridership for the urban rail line being planned by the city of Austin and Cap Metro. However, the line's proposed extension to the airport is only a future phase and remains unfunded and unauthorized. To serve a campus near the highways' intersection, track and service would need to be extended yet farther to SH 130 – on whose nickel, no one knows. Rail-transit advocate and former state Rep. Mike Krusee has questioned the wisdom of that plan, as it's (literally) a longer shot to receive financing; he noted that a campus at Highway 71 and SH 130 could also cause congestion along 71 en route to the airport, requiring millions more in road improvements.

The city of Austin last week unveiled its Strategic Mobility Program and is embarking on a comprehensive plan; meanwhile, Cap Metro continues to update its All Systems Go! plan. Asked which site would most help rail transit, both Todd Hemingson, vice president of strategic planning and development at Capital Metro, and Rob Spillar, the city's transportation director, said they could make an argument for either one – but more pointedly for Downtown. Hemingson noted that high-rise office towers within the Capitol Complex (perhaps on the site of underutilized parking garages) also could serve the state's office needs, and as a transit planner, that would be his first choice: "At the end of the day, we would most like to reinforce the urban core and see the site there," he said. "The two main sites ostensibly under consideration are a lot better than a lot of places in the region that they could have picked – but Downtown would be the best."

"I don't disagree with that," said Canta­lu­po. "But whether land use or transportation should drive decisions and which should support the other is the classic 'chicken or the egg' question. The main point is – for something that big, this is a decision we should all be making together. It's too big and too important for all of us not to get in a room and start to figure it out." Johnson had reviewed the state campus concept with Hemingson but not with Spillar or Cantalupo; he does believe the project should advance regional mobility, and he expressed interest in the Texas Facilities Commission now promoting regional coordination and planning among all the various entities.

As for packing all the state's office needs into high-rise Capitol Complex redevelopment, Johnson said that greenfield development on SH 130 is daunting enough. Downtown "would be a more expensive and complicated way to go – you'd have to tear down first, so it would take longer." He doesn't want to make consolidation and lease-space replacement any slower or uncertain, given the state's already pressing space needs.

"But I do think the state needs to do some redevelopment of the Capitol Complex, too," Johnson continued. Particularly if urban rail goes in along San Jacinto, between the Capitol and the University of Texas as proposed, he sees the potential for transit-oriented redevelopment. For now, though, Johnson's most focused on a new suburban campus and on doing it right: "It would be the biggest disappointment in the world if we did the wrong thing."

Developing Stories
If You Believe in Villa Muse, Clap Your Hands

Best-Laid Plans
How does the patchwork of separate plans for the future of Central Texas fit together? No one knows. 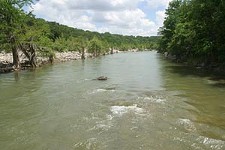