Will the Well Run Dry for Las Lomitas? 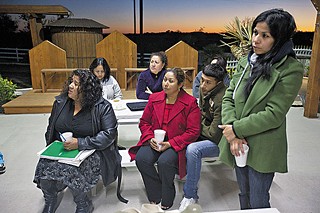 It was past sunset when Ileana Riojas began to read aloud the proposed bylaws of the Las Lomitas Neighborhood Associa­tion. Riojas, who isn't a resident of the nearly 10-year-old subdivision but was helping out in starting the NA, stood with her shoulders hunched, thanks to the sudden arrival of fall, and faced a group of about 40 residents. She kept reading through quorum rules (they decided on 15) and membership fees ($5 per person, all paying members can vote), while a breeze moved through a small, open but covered pavilion at the edge of Gerardo and Maria Avila's property. To Riojas' left, a faux water mill pumped trucked-in water into a faux cistern. It served as a reminder of the reasons for the meeting.

On Oct. 11, the Travis County Com­mis­sion­ers Court was set to close the last of a series of standpipes that were a lingering part of Travis' former water distribution system. Most of these had been shuttered by 2009, but the spout at the county's Precinct 4 satellite office had remained open, where it still provides water to a host of area residents. At least some – and perhaps many – of its users still rely on it as a source of cooking, bathing, toilet use, and, despite recent warnings, drinking water.

This all became clear to commissioners and the county's executive in charge of Trans­portation & Natural Resources, Steven Manilla, on the morning of Oct. 11. Riojas, who works for the Avilas' landscaping business and represented them before the commissioners that day, read from a prepared statement. "Many of the citizens do not communicate well in English, and we need to make certain that you are aware of the dire consequences your proposal to shut down their water supply will have on this community of Travis County taxpayers," she said. "By proposing to close the water spout at Highway 183, you are proposing to cut the lifeline of this community, literally."

Moreover, other southern Travis County residents have also told the commissioners that the Precinct 4 spout represents their sole access to water; accordingly, commissioners signed off last week on a questionnaire for users in order to inform the county's next move. For now, the outlet is open under guard and beneath warnings of the water's nonpotability – from 8am until 2pm, Tuesdays through Saturdays.

Las Lomitas' problems date back roughly a decade, to a dispute between developer Hank Peavler and the Creedmoor-Maha Water Supply Corporation: The former is the party responsible for the platting and sale of the 15 10-plus-acre lots that make up the subdivision; the latter holds the Certificate of Convenience and Necessity – and thus, exclusive water sale rights – for the area. In a September 2002 letter provided to the Chronicle by Las Lomitas residents, Peav­ler argues that he is "not responsible for providing" the Avilas with any utilities. Creed­moor-Maha's attorney, Mark Zeppa, argues otherwise in a recent email to residents. "The cost burden for Las Lomitas rightly belongs on the developer Hank Peavler," Zeppa writes. "He is the one who sold lots without a proper water supply so he is the one who should bear the cost of fixing the problem."

Zeppa then hints at another issue. "Unfor­tun­ately, the Las Lomitas customers have taken so long to act they may no longer be able to sue Mr. Peavler to fix their problems," he writes. "As regrettable as this is, Creedmoor's other customers should not have to bear the cost to save Mr. Peavler's land purchasers from their own mistakes." Although Creedmoor-Maha is willing to service Las Lomitas, Zeppa says, he cites two conditions the residents would have to meet before they can be hooked into that system. The first, he writes, is that "water system facilities must be designed and constructed in compliance with the state's public drinking water rules and the utility's engineering design standards"; the second is that "all Creedmoor customers comply with the cooperative's tariff."

Water system design and hookup is fairly expensive, especially after the fact. Accord­ing to another email from Zeppa, Las Lomitas would have to hire Creedmoor-Maha's engineer, Chase Baromeo, to design anything that connects with the utility's system. Though one email from Zeppa suggested that Baromeo would be willing to "waive [his] customary fee," there would still be considerable costs associated with the project. The tariff is a set of rules and fees that, according to Zeppa, "applies equally to all service applicants and actual water customers." Because Creedmoor-Maha is a nonprofit, Zeppa continues, "everyone must pay their fair share."

Texas RioGrande Legal Aid attorney D'Ann Johnson has been working with Las Lomitas residents and says it appears that not all of the lots face the same hurdles. Indeed, seven properties on the edge of the subdivision don't appear to share plat restrictions that would limit their neighbors in terms of both housing type (single family, which not all of the lots in the subdivision currently host) and septic construction. "What we're trying to do is figure out what the individual issues are with each lot that might be a roadblock to them getting hooked up to the water system," she said. "There are some that are the easy ones. ... We just need to clarify what their water rights are to the water company."

Still, even with some legal hurdles cleared, money issues will remain. In her testimony to the commissioners court, Riojas suggested that "if Las Lomitas taxpayers chose not to pay property taxes for two years, they would have enough to build the water easements and pipelines." Though grant money could be available to residents, they believe that the costs involved could reach $200,000 – not the sort of thing that you can fund with $5 membership dues.

Just before the residents of Las Lomitas elected Maria Avila as the president of their neighborhood association, it looked for a split second like Gerardo Avila might also want the job. He backed down – reminding those present that Maria is his wife. The move brought laughter but no hesitation; the neighbors promptly elected their officers and broke for the night with the easy part behind them. The first meeting of their association is set for this Thursday, Nov. 10. 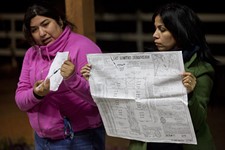 So Close to Water, Yet So Far
South Travis subdivision trying to raise funds for water line

Developing Stories
If You Believe in Villa Muse, Clap Your Hands