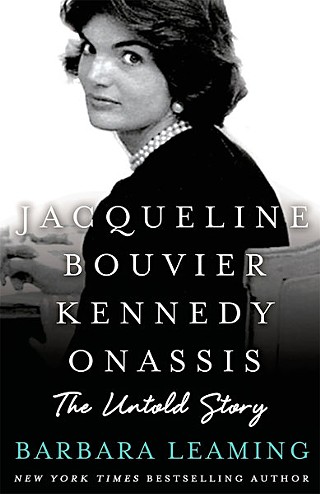 
Anyone old enough to remember the assassination of John F. Kennedy 51 years ago this month also recalls the calm, quiet strength that the newly widowed first lady exhibited during the hours, days, and years that followed.

Indeed, Leaming lifts the veil of this perfect picture of stoicism and reveals an altogether different portrait – one of a popular fashion icon who was left emotionally paralyzed for decades after witnessing her husband's murder that November day in Dallas.

This is Leaming's third Kennedy-related book, the first since 2001's Mrs. Kennedy: The Missing History of the Kennedy Years, which critics faulted for its unfounded assumptions. In The Untold Story, however, Leaming drills deeper, drawing on letters, diary entries, and other documents to conclude that Kennedy presented all the symptoms of post-traumatic stress disorder.

Kennedy's condition went undiagnosed for years; it was, after all, before PTSD was recognized as a medical condition, before its symptoms – sleepnessness, fear, anger, suicidal thoughts, and any number of "triggers" that provoke unpredictable behavior – were seen in soldiers returning from Vietnam. And PTSD wasn't officially identified as a psychiatric disorder until 1980.

The early part of Leaming's book fails to impress as the author rehashes Jacqueline Bouvier's early years, her ambitions, and her ambiguous courtship with a rising political star, whose skirt-chasing habits Jackie believed she could change. Only when the president and his wife are in Dallas do the pages begin to turn more vigorously. That's when we start to comprehend the psychological toll the murder took on the first lady. Sitting next to her husband in the back of a limousine, surely she must have heard the "loud thump, like a melon exploding on a pavement," when the third shot ripped into her husband's head, causing "... brain and bone matter [to rain] on Jackie's hair, face, and clothes." From there, we glean new details about the PTSD survivor's long, tormented life: the self-medicating with vodka; the sudden, inexplicable outbursts; her thoughts of suicide; and the idea that her children would be better off without her.

Notably missing from this account are the enormous effects Jackie's PTSD must have had on her two children, but perhaps Leaming is saving those details for her next Kennedy book.