The PHP presents potential risks to Edwards Aquifer, and there is little Austin can do about it 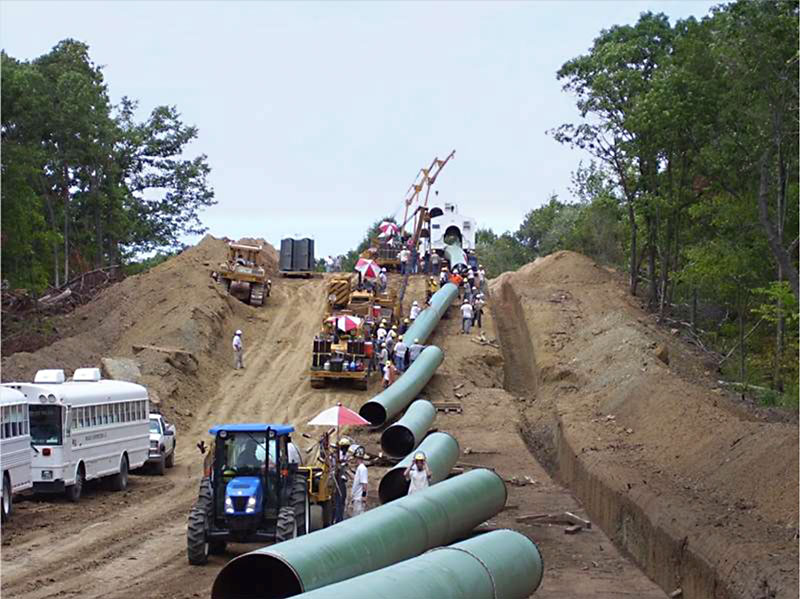 City staff report on the Permian Highway Pipeline provides an example of a 42-inch pipeline trench and its 125-foot-wide easement. (Courtesy of City of Austin)

Back on June 20, City Council adopted a resolution opposing the Permian Highway Pipeline, a natural gas line planned to transport methane from the West Texas Permian Basin (near Fort Stockton) to the Houston area for processing, then to the Gulf Coast, primarily for export. The resolution, authored by Council Member Leslie Pool and carrying the maximum four co-sponsors, passed unanimously on consent and without discussion – in a passing mention at the prior work session, Pool noted that advocates had been asked not to testify at the meeting because of the full agenda for the last meeting before Council's summer break.

Nevertheless, the Council resolution provides a litany of reasons to oppose the PHP, a 42-inch line that will cross the Texas Hill Country and the Edwards and Trinity aquifers. It cites the potential risk of excavation through the karst limestone of the aquifers, the likely damage to endangered species habitat (golden-cheeked warblers and salamanders), and worst-case scenarios of hydrocarbons leaking or spilling into "a major source of drinking water for two million people." Beyond those immediate threats, the resolution notes, lie the prospect of 2.1 billion cubic feet per day of new carbon emissions: "a quantity of hydrocarbons for export that, when burned, will produce more carbon pollution than the entire Austin area, which will contribute to climate change with all its deleterious effects on the people of Austin and the world."

The resolution directed staff to study the potential impacts of the pipeline. The resulting Aug. 28 report by the Water­shed Protec­tion Department and Environmental Officer Chris Herrington ("Potential Water Quality Impacts") made two major conclusions: that the PHP indeed presents potential risks to the Edwards Aquifer, which it will cross in Hays County, and that there is very little Austin can do about it – because the line will pass south of Austin and Travis County, and because under state law, such pipelines are granted eminent-domain powers and are "specifically exempted from having to comply with the Texas Edwards Aquifer protection rules." There has been considerable opposition to the PHP, including legal action, from Hill Country jurisdictions, residents, and landowners – but opponents have failed to stop the project or force a rerouting of the pipeline. (Along with Austin, those opponents include San Marcos, Kyle, Wimberley, the Barton Springs/Edwards Aquifer Conservation District, Hays Trinity Groundwater Conserva­tion District, Save Barton Creek Association, and Wimberley Valley Watershed Association.)

The PHP is a joint project of Kinder Mor­gan Texas Pipe­line (KMTP) and EagleClaw Midstream Ventures. Construc­tion has already begun on the western segments and, according to Kinder Morgan VP for Public Affairs Allen Fore, is expected to begin in the Hill Country segment as early as October for an overall completion goal of fall 2020. Fore says that while the company respects Austin's position, the PHP is outside the city's jurisdiction, and he disputes that it presents substantial environmental risks to the Edwards Aquifer or endangered species. Moreover, he said, pipelines have existed through the area for decades without significant problems. "It's the same product we have been transporting in the area for over 50 years," he told the Chronicle. "There are hundreds of miles of natural gas pipeline in the aquifer area currently. And I would ask what ... issues have there been with those natural gas pipelines, related to the aquifer? I'm not aware of any." Intrastate oversight is provided by the Texas Rail­road Commis­sion, and Fore cites as well permitting review by the U.S. Fish and Wildlife Service (endangered species), the Texas Commis­sion on Environmental Qual­ity (compression stations), and the U.S. Army Corps of Engineers (surface water crossings).

Despite the broad opposition, it appears that come next fall, there will be one more major pipeline running through the Hill Country, above the aquifer and in its recharge zones. On the largest question – whether the endless burning of fossil fuels presents a growing threat to the health of the global ecosystem – the industry answer is: We are capturing "waste gas" from fracking operations that is currently being flared into the atmosphere. Either we burn it there, or burn it elsewhere.