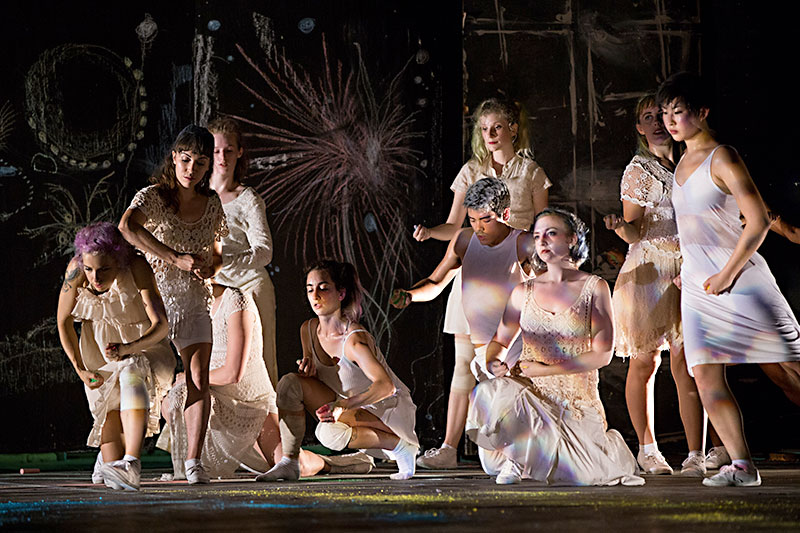 A near-full moon. An outdoor performance. Promise of an après-theatre night swim. Dancer-choreographer Amy Morrow organized an evening of art and community with her troupe, the Theorists, a few guest choreographers and dancers, and musicians from Rattletree Marimba, who provided accompaniment for pre- and post-show dance jams. This sprawling evening, and the central dance work, Morrow's "Hiraeth," reflected, seemingly sans filter, the information bombardment, constant interruption, on-demand aesthetic stimulation, and cultural mishmash of our daily experiences. In our age, perhaps more than ever, editing appears to be a significant challenge.

Following a pre-show onstage dance party, a short work by guest choreographer Kira Blazek, "Remix | Reorganize," was a likable start; sneakers, jogging shorts, and juicy, ebbing movement are to a dance season what Saturday brunch is to a weekend. Often lifting their T-shirts to cover their faces, the dancers delegated expression to their abs. Lip-synching, clips of songs by George Strait and the Toadies, and fun poked at movement exercises – "I am drawing with my shin!" shouted Lisa del Rosario before being carried offstage by the group – were all game, but these fragments were suspended around a common focus: We are testing the limits of this work, the artists might say, and so far we haven't busted it.

By the time the anchoring work began, the sky had darkened; pairs of dancers swirled in, forehead to forehead, in dappled stage light (designed by Cheles Rhynes). "Hiraeth" had a cast of 14 engaging, present dancers, wearing varied white and off-white garments, kneepads, and sneakers. The dancing was loose and delicious, incorporating ballroom, ballet, and more into a new language, a fluid pidgin that appeared to be the common tongue for young dancers in sneakers and kneepads on a hot, humid, buggy night. Morrow teaches Gaga, the sensation-based movement method invented by Ohad Naharin, which no doubt contributed to the dancers' suppleness. When a line of them performed headstands, their legs splayed and undulated like strands of seaweed.

But though the dancing and several vignettes were lovely, what was the work? I couldn't discern it. The mixed soundtrack – clips of songs constantly interrupted by bits of conversations and driving directions from someone's navigation app – made the case that Morrow and her collaborators are cultural omnivores. But the fragmenting and interruptions eventually wore down "Hiraeth" – or me – to the extent that I couldn't see how the jumble of elements hung together. And as if to make sure we couldn't get too close, the work was cleaved by an intermission, during which swing-dancing onstage was encouraged. Still to come after the break were dancers stepping in and out of a string of tied-together sneakers, bursting into Indian bharatanatyam movements, throwing about colored powder as though celebrating Holi, and writing "HIRAETH" (a Welsh word loosely translated as "longing for home") over a chalk-graffitied wall.

Given that the first two works had been interposed with a few words from Morrow and several film clips, it seemed odd that there was not even a pause before the start of the final work, "Those Souls, Poor and Unfortunate," Amy Litzinger and Kelsey Oliver's disability-studies meditation on The Little Mermaid's Ariel. The work's voiceover conversation explored Ariel's want for legs from a social-model lens (the "problem" is the bipedal people's, not hers). Was this contradicted when dancers frolicked around and towered over Litzinger, her motorized wheelchair swathed in colorful tulle, rather than following Litzinger's lead? As with "Hiraeth," "Those Souls" had the type of ending for which people hesitate (Is it over?) before applauding. But although the audience had dwindled to perhaps half its starting size, several of those who remained popped right up for a second marimba set. No doubt they would head down to the spring, too, for that night swim. Seen / Soon Sept. 22
Being dazzled by Ai Weiwei’s Forever Bicycles on Austin Museum Day and adventuring with the Theorists at Zilker