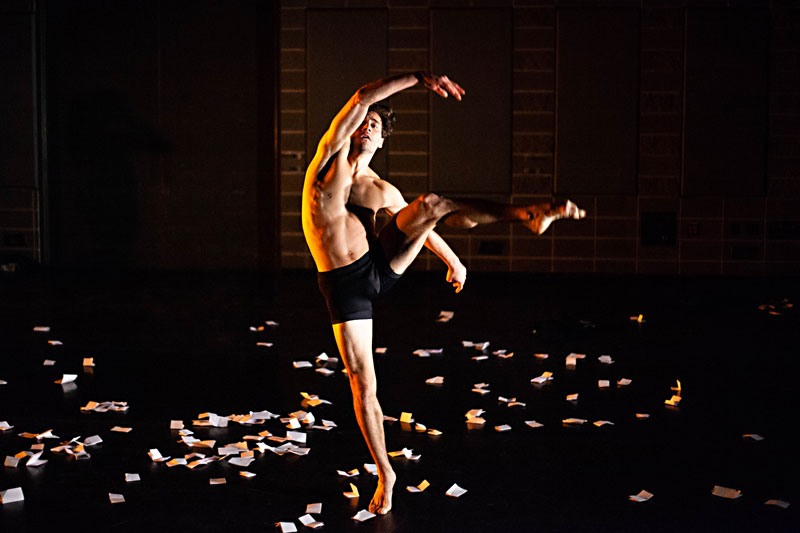 Myles Lavallee in Drowning by Number 2 (Photo by Niko Hernandez)

Prior to the beginning of Beginning/ αρχή, the first public showing by Austin-based ISHIDA Dance Company, the audience was treated to a host of "small bites" from an appetizing array of local restaurants (Intero, Oseyo, Le Politique, and Swift's Attic, to name a few). These amuse-bouches turned out to be a fitting prelude to the performance itself, which consisted of five dances that were all relatively short works or excerpts from longer works. It was a sampler of its own, serving the first audiences for this new contemporary dance troupe a taste of what it, shall we say, brings to the table of local culture.

One thing ISHIDA brings, as the performance quickly made clear, are dancers of arresting athleticism, capable of whirling leaps with bodies inverted, back-to-the-ground breakdancing spins, and going straight from the former into the latter without a breath. Combined with this Olympic gymnast-level movement – often performed in multiple combinations at lightning speed – was a fluidity of motion that made it look as if the dancers had lost all the bones in their bodies. They didn't so much move as flow.

Most of this dynamic movement was choreographed by Artistic Director Brett Ishida, herself a dancer having formerly worked with Les Grands Ballets Canadiens, among other companies. Judging from her pieces here, she's intent on packing as much movement into a dance as she can. Brief as these works were (roughly 5-10 minutes each), they had so much happening in them – and happening so swiftly – that it felt like each contained enough movement for dances of a half-hour or more. Which could have been exhausting for the viewer, but there was such direction, such purpose, in this rush of steps, leaps, twirls, stretches, falls, rolls, gestures, grasps, and lifts that it held you in its grip trying to follow it all – or at least, as much as you could when more than one dancer was onstage and the moves were multiplied. And even then, when your attention was divided among two, three, five dancers, each moving independently, this through line of strong intent kept all of it engaging to the point that once it ended, you felt like watching it again to see if you could absorb more of it.

As Beginning/ αρχή was as much a fundraiser for ISHIDA Dance as a performance debut, Brett Ishida stepped onstage after each piece like a chef visiting your table between courses to explain what you'd just consumed. She described the use of narrative in her choreography – nothing so straightforward as in a story ballet, but having a definite progression of events or emotions – and it was helpful, for instance, to hear her discuss the five sections of the company-choreographed work Interstices, which followed an individual suffering displacement and how people in the unfamiliar place where he landed helped revive him and eventually integrate him into their community. What she told us certainly provided insight into that particular dance – giving context to, say, the dance's striking image of five dancers holding onto different body parts of a sixth (one his head, one each wrist and each ankle) and moving him like a marionette – but even better, it illuminated Ishida's overall creative approach, which offered insight into the dances that followed.

One of those dances consisted of two sections from a work in progress titled dream of black you come roaming, in which a woman and man deal with their doppelgängers. In its early moments, the men mirrored each other and the women did the same, but then there were also men and women partnering, and sometimes the couple and the doppelgängers switched partners, raising questions of who was in control and who wanted what from whom. That, along with some captivating moves between partners – heads touching heads, one dancer rolling over another's back – made these bits tantalizing in the way of flavorful appetizers: They left you wanting more.

Fortunately, Ishida promised a full-length version of dream of black you come roaming is forthcoming this summer. That's good to know. The "small bites" of Beginning/ αρχή have whetted our appetite for a full meal.

A version of this article appeared in print on January 10, 2020 with the headline: More, Please 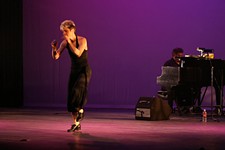