Beside the Point: Still Waiting for the Punch Line

Awarding an anti-choice, nonmedical group a million-dollar state health contract is nothing short of absurdist comedy

Will Trump Get Out the Latino Vote?

APD admits to long-running wrongdoings with its evidence

Jury expected to head out for deliberation by end of week

The Hightower Report: Fed Up With Wall Street? Do Something About It! 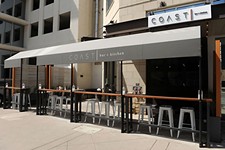 Cheap Eats: Luke's Inside Out

Coating your ribs for less than $20

Where to play while the kids are away

Charting the Monsters of Fantastic Fest

Here there be movies

BY JOSH KUPECKI AND RICHARD WHITTAKER

Sex, lies, and secrets in the U.S. premiere of Park Chan-wook's latest

Raul Garza's new play explores the power of the storyteller

The Luv Doc: Into It

The Gender Unbound Art Fest will spotlight the work of trans, intersex, and gender nonconforming artists and musicians