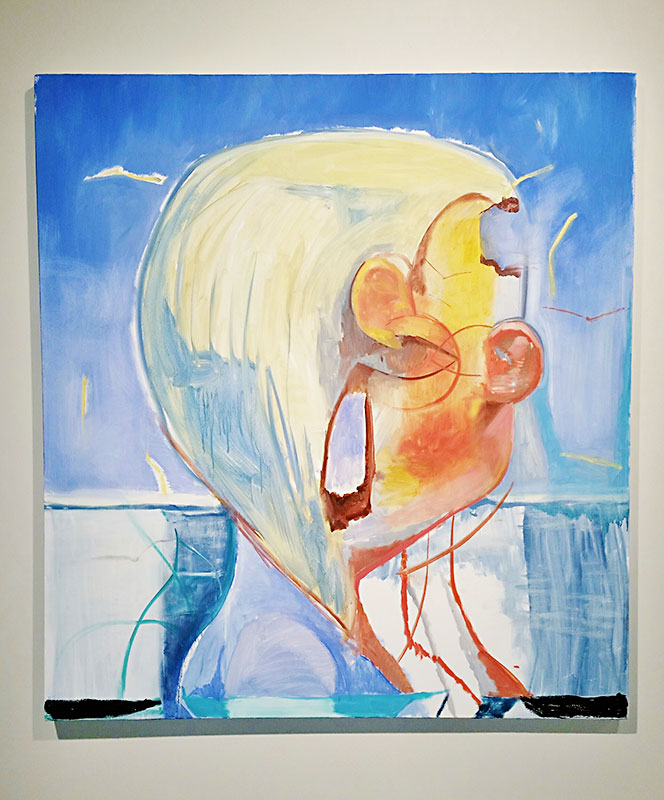 Erin Cunningham's cast-iron sculpture, of a delicate nature, rises in five separate segments inches from the ICOSA Collective Gallery's cement floor. The divots and swirls in the texture of the floor, which would normally go unnoticed, inform the elemental color and texture of the segments, which mimic the undulations of a human body, its ripples of flesh and weighty contours. Adding to this perception are the detailed surfaces of the segments, finely rendered castings of an ornate fabric that hugs the forms like lace.

The surfaces of the segments are sensuous, but the edges can be sharper, sometimes ending in points, giving them the look of great leaves or lily pads gathered together by a gentle ripple on a pond or bodies bobbing just below the pond's surface, a contradiction of the heavy and the light. All in all, contradiction seems to define "Figure/Heads," a two-artist exhibition featuring Cunningham and David Bae. Bae and Cunningham are very different artists, but just as Cunningham manages throughout the show to meld the solidity of metals and heavy media with fragile forms, her sculptures also interact fluidly – and ecstatically – with Bae's paintings. Bae's Lost Cost, for example, could hardly be more unlike of a delicate nature. It is a large canvas in mostly reds and pinks, luscious like bubblegum and strawberries. The central figure implies an obscured bust, only the figure's head is turned away, so we only get a part of a profile and the back of an ear. A swatch of color near the lower edge of the canvas is an aggressive stream of blue, white, and black tones, making it appear dull but also reflective, and contributing a vivid action to the largely static image. The head is formed by blocks and patches, making pyramids, lines, and curves that fill the space in and around the figure like antic characters lending richness to an elusive narrative. The portrait is anonymous but also specific, abstract yet precise. The figure is aloof, but it exudes drama, like an Olmec head or a pouting god.

Just as each segment in Cunningham's of a delicate nature is isolated, yet still forms a cohesive whole with the rest, the piecemeal appearance of Bae's Lost Cost is meticulously balanced and complete. Lost Cost also echoes of a delicate nature's fragmented bodies, which can be located in all of Cunningham's works, such as Knee, a small wall sculpture of a folded knee, the leg's flesh bulging from a luxurious frame. The surface of this rather simple piece is tempting, dimpled with the imperfections of the metal, mingled with the subtleties of the skin, the minute bumps and creases that make skin so alluring to the eye as well as to the touch.

The relationships between the work of Bae and Cunningham can be drawn firmly in places such as these (fragments and bodies), but much more exciting is how two such refined artists, whose work is utterly their own, could combine so well in a single show, like two bands so good you can't choose the headliner. It is rare to find a complex entwinement that is also intensely unified, like a closed system frantic with interior noise, but this would seem to be the case with "Figure/Heads" – an event, like an explosion, compact with energy and teeming with the wild brightness of countless, intricate reactions.