In the troupe's latest choreodramas, dancing desperados persisted and partied 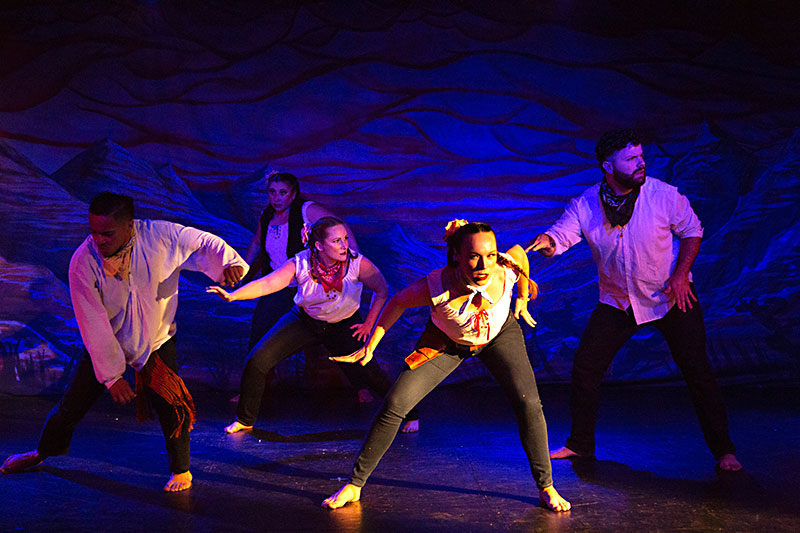 Roén Salinas, artistic director of Aztlan Dance Company, began the show by lighting a fire. The small flame danced against the backdrop (painted by James Lawrence Thornton), a mountain-desert landscape under lava-colored clouds serving as a reminder that outside the air-conditioned black box, the heat index was still (still) around 100 degrees. An altar of sorts – bebidas, plantas – was set up stage right. A beautiful dancer in an embroidered muumuu, Ivelisse Santiago as the Coyolxauhqui Healer (Coyolxauhqui being an Aztec moon goddess with a violent past), wafted the smoke from burned sage around the room. Clearly, we were about to be immersed in a hot, semiurban wilderness.

I first visited the company at its home, the Santa Cruz Theater (then the Santa Cruz Center for Culture) on East Seventh across from Huston-Tillotson University, a decade ago. Looking at my notes from visits since that time, I can see the new-Eastside, gentrified nightlife edging in on the little theatre, but it remains triumphant, a beacon. The bars and condos that are now adjacent to the Santa Cruz situate it physically where it perhaps has always lived in spirit: at the center of cultural and personal histories with many-tentacled references, constant code-shifts, and mercurial reference points. Salinas' shows – "choreodramas" – are rich with layered and intermingled experiences and identities, represented in contemporary and folklórico dance, theatre, and art. Despite their fluidity and shapeshifting, they have aplomb, not to mention persevering optimism and a sense of humor.

The Santa Cruz is surely the most colorful black box in town – an Instagrammable mural on the exterior leads to an art gallery, a cafe, a raised stage for dance-friendly sightlines, comfortable vintage plush seats, and, often, women with flowers in their hair. A man in the row in front of mine came in late, and before sitting down, he kissed two female friends on the cheek. By then, the six Dancing Desperados – the women in braids, the men in boleros – had already been confronted by a nemesis, the Toniquero (Paul Del Bosque), a dark-shaded pusher peddling a dangerous elixir that threatened to seduce, confuse, and corrupt the division between life and death. With bare feet, the Desperados rolled across the floor like tumbleweeds, blown over by the convolution of two worlds.

To a playlist ranging from Calexico to Mariachi el Bronx, the Desperados persisted, driving their shoulders into beats and whirling on a dime only to reground themselves. During the course of the show, they slayed the magical Toniquero at least two times, tempting La Diabla (the powerful Olivia Rodriguez) and inciting La Muerte, a Día de los Muertos skeleton come to life (Milinda Hernandez). As they gained strength against the Toniquero, they donned their folklórico boots, hammering out rhythms that rocked the seats in the house and incited gritos from the audience.

Eventually, in a narrative helped along by master of ceremonies Salinas, the Desperados triumphed and equilibrium was restored. At the Santa Cruz, of course, regardless of what your cultural references are or what borough or barrio you came from, such restoration, temporary or not, is an occasion to put on your reinforced heels, right where you are, and party.

A version of this article appeared in print on August 31, 2018 with the headline: Rocking the Heat 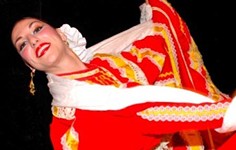