"All you need to make a movie is a girl and a gun." – Jean-Luc Godard

A girl, a guy, a gun, and a kinky-romantic Christmas request results in a maelstrom of grindingly intense, hallucinatory horror – and not a little humor – in Follow, the feature directorial debut of Owen Egerton, whose seemingly infinite array of talents have apparently never heard the word "boundary."

Honestly, the recent Austin Chronicle "Best of Austin" poll tagged him as Best Local Author/Poet, but that's last week's news. Locals have long known the hyper-creative Egerton as a master of whatever artistic endeavor he throws himself into. He was one of the co-founders of Aus­tin's original film-centric comedy confabulation, Mr. Sinus Theater, way back in the Alamo Drafthouse's original, sorely missed, 409 Colorado St. incarnation, and he's also, alongside the equally prodigious John Erler, one of the prime mover/shakers of Sinus descendant Master Pancake Theater, which sells out the Alamo Ritz on a weekly basis.

But wait, there's more. A lot more, like his novels (The Book of Harold, Everyone Says That at the End of the World) and his mind-blowingly unique short story collection How Best to Avoid Dying, two stories of which formed the bare-bones basis for Follow.

Clearly, Owen Egerton is a multidisciplinary force of nature. And Follow, which features psychotically excellent performances from Noah Segan (Looper, Brick) and Olivia Grace Applegate, and some of local gore mistresses Hawgfly Productions' most disturbingly realistic special makeup effects, will only serve to cement his growing reputation as "He Who Can Do No Wrong."

"My career arc is confused and nothing to make a plan on," Egerton says with a laugh, before launching into his horror show's origin story.

"The key movie moment of my childhood," recalls Egerton, "was watching black and white movies after everyone else had gone to sleep. This was around the time of the birth of cable and I remember watching Night of the Living Dead when I was 10 or 11 years old and thinking 'I shouldn't be allowed to watch this. This is just too much.' That scene where the daughter comes back to life in the basement was the most horrifying thing ever – and it was great! I mean, I was aware of the slasher sequels that were playing in theatres at the time, Friday the 13th part whatever, but seeing Night of the Living Dead for the first time, at that age? Man, that was something else."

Prior to Follow, Egerton had been working for Disney and Fox, writing (and often re-writing) screenplays: "And those were all for films I was not necessarily interested in watching. So I thought, 'Well, why don't I write a script for a film that I would be excited to watch, and write it at a budget that I could afford, and then direct it myself?' I needed to take a step back from the studio world, and that's what I did." 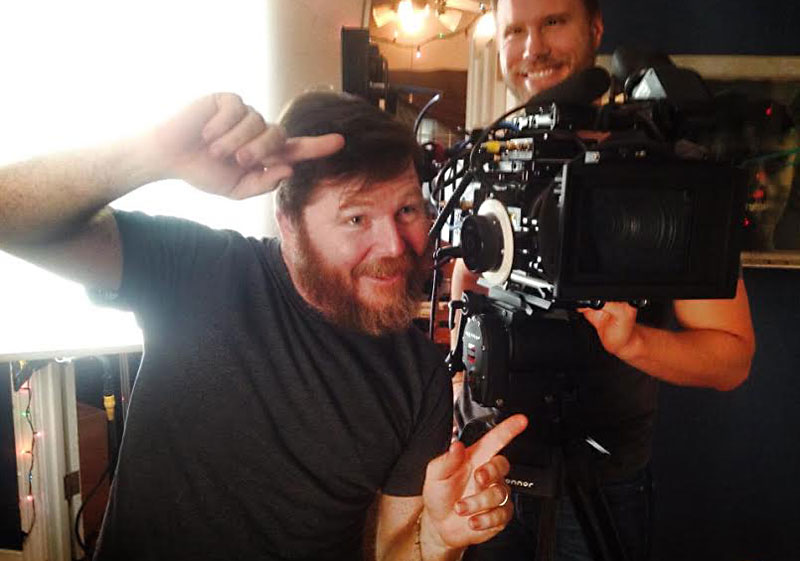 The feature film version of Follow isn't the story's first iteration, either. Two years ago, Egerton hooked up with Seth Cap­lan, producer of the Indie Spirit Award-winning In Search of a Midnight Kiss, grabbed actors Jonny Mars and Jessie Tilton, and shot a short, proof-of-concept version in one day, on Eger­ton's 40th birthday. That made it into SXSW and from there, the pair recruited producer/financier Chris Col­bert, fleshed out the script, and began the casting process. The feature shoot took place over a scant 16 days in a semi-abandoned house in the Clarksville neighborhood. Fittingly for a psychological horror film, the house had both a severely creepy attic and, unusual for Austin, an equally unsettling basement. The shoot, hurried though it was – the property's owner was planning to raze it – turned out to be a model of low-budget, indie perfection.

"The people making movies in this town are outstanding," proclaims the passionate Egerton, recounting the entire production crew's accomplishments like a proud parent ticking off his whiz-kid's accomplishments.

"Scott Colquitt went sleepless to make an abandoned house a home, build an artificial deck, design an artist's basement, and find the perfect Santa candles. Greg Armstrong was our one-man sound team, hunting whispers like a panther. Ellie Ann Fenton is a light poet and Chris Archer a wonder. Drew Saplin kept the schedule moving, Ezra Venetos worked with Chris Colbert to steer the journey. Sean McQueeney and I spent hours and hours snipping and clipping and building. No one was getting paid much. I'm sure one national commercial would have paid them more. But we were making a movie. Everyone was working their asses off and over and over I was in awe with not only the craft and insight of our team, but also the joy! More than once I started the day with the thought, 'Hot damn, we're making films in Austin, Texas. God must like us.'"

Fantastic Fest 2015 runs Sept. 24 through Oct. 1 at the Alamo South Lamar. Fest badges are sold out, but often during the festival, individual tickets for films will open up, so patient and intrepid Austinites still have a chance to sample the wide array of films on offer. See www.fantasticfest.com for more info.

Owen Egerton, Fantastic fest 2015, Follow, The Book of Harold, Everyone Says That at the End of the World, How Best to Avoid Dying