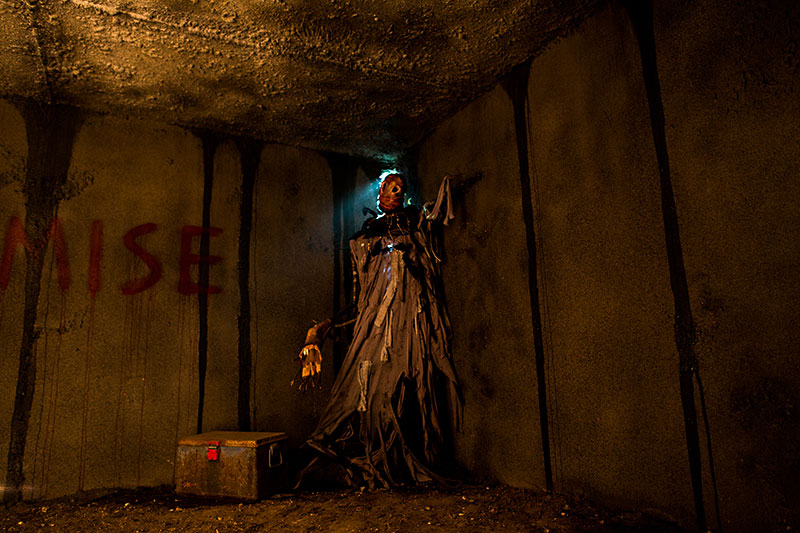 The monsters we make in Owen Egerton's Mercy Black

Owen Egerton is face down on the ground of the back patio at Once Over Coffee on South First. He crawls in a herky-jerky fashion, then pushes himself up on his arms, arching his back in a creepy, unbalanced way. This being Austin, and this being Egerton, it barely merits a glance. But when he did the same sliding scuttle in Los Angeles two years ago, it got plenty of side-eye and a dream contract, to direct a script he wrote for indie film titans Blumhouse Productions – psychological horror Mercy Black.

Egerton bounces up off the coffee shop deck, wipes off a few leaves, and sits back down. A hardcore fan of Seventies and Eighties horror, Egerton grew up with the iconic slashers, the Freddies and Jasons. "I just eat 'em up," he said, "and one of the cool things about working on this was in developing a new monster."

Mercy Black, which arrived with a sudden blast of publicity this week on Netflix, is the story of a woman (Jurassic World: Fallen Kingdom's Daniella Pineda) released after a decade in a mental institution. As a child, she had been part of a hideous, violent crime that she and her friends had blamed on a force in the woods that they called "Mercy Black." Egerton described Mercy as a totemic incarnation of their pain: "These kids are empowering this monster from their own trauma."

The outline of the specter was filled in through conversations with costume designer Gypsy Taylor and Ryan Turek, Blumhouse's vice president of film development. One of those conversations, "in a froufrou coffee shop in Los Angeles," was where he did that crawl. "I was imagining something like a scarecrow, something that shouldn't be able to move, made of sticks and pieces of cloth."


Yet there's a perpetual question about whether Mercy is, in some supernatural way, real, or if it's simply the power of an urban myth and childhood fantasy. The story is far removed from his last film, horror-comedy Blood Fest, and much closer to the author/filmmaker's darker, more serious side, as revealed in novels like Hollow and his script for 2017's ghost story/true crime drama hybrid, The Axe Murders of Villisca. Although the questions of guilt and grief were always core to the script, those conversations with Turek helped focus those themes. "Ryan and I speak a similar language," said Egerton. "We're not film school kids, and it was great to talk to him about, OK, what is the core of Mercy Black? The idea of imagining, what would these 12-year-old girls make out in the woods?"

Mercy Black's true darkness lies in the fact that it's young girls who commit the crime, and that, as adults, they must live with what they did. Egerton said, "Something that we really do dig about horror movies is the melodramatic aspect of good guys/bad guys, black hat/white hat. But I'm pretty intrigued by the idea of the gray hat, of what is it when a good person has done something horrible." That's why, even though Mercy Black is Egerton tapping into the iconic power of movie monsters, it remains a character study of the shadowy side of the human condition. He said, "I am constantly shocked by how cruel people can be to people, and how cruel people can be to themselves."

Because Mercy Black deals with young women behaving violently because of an urban myth, Egerton was very aware that people would see parallels to the the infamous 2014 Slender Man attack in Wisconsin, where two girls nearly killed a third, and claimed they did so at the behest of the creature that pervades so many Creepy Pasta tales. The makers of 2018 horror film Slender Man faced a backlash even before the film was released, because people (incorrectly) believed that they were exploiting the crime, rather than adapting the online narrative of Slender Man. While Egerton said he understood why people could be upset, and could regard anything in that subject matter as exploitative, "We're not retelling that story." However, he added, "We are exploring similar situations, and you want to be – not just sensitive, but respectful of the people involved in those stories."

Instead, what drew him to Mercy Black was that the issue of children committing violent crimes is so prevalent. Whether it's the Slender Man attack, or the murder of Jamie Bulger, or the case of Mary Bell, whose daughter found out through tabloid reporters that her mother had killed two boys when she was 10 years old, "Those stories are terrifying to me," said Egerton. "Those stories where someone is victim and responsible party, that scares me, and the way I deal with it is to write about the things that scare me."

Austin Chronicle: What's fascinating here is that you make it very clear – Marina did what she was accused of. The real question you ask is why, and how she deals with it.

Owen Egerton: Early on a producer had said, "Oh, she needs to be innocent." That is not this story. When something tragic happens to an individual, to a family, to a community, there are different ways of reacting to it. In this particular situation, you have people taking different routes. So you have Alice [Elle LaMont], the sister, who is like, "We don't even speak about it. Pretend it didn't happen. Don't even mention it, and that way it doesn't have any power, because I'm not even looking at it." Whereas Janeane Garofalo's character [Marina's therapist, Dr. Ward] is, "This is solved. Look, we've cured you, and you're a different person now." But our hero realizes that neither of these solutions are going to work for her, and they're not going to protect what's most important to her, which is her nephew. So she's forced to do the most difficult thing of all, which is face exactly what she's done.

AB: Society has no idea of how to deal with children who do terrible things, and that's only complicated now by research that shows that the human brain is still developing into the early 20s.

OE: When I was researching these stories, like Mary Bell, and the Slender Man attack, I started connecting it with a bit of a passion of mine, which is the human ability to believe. That fascinates me. It's one of our more powerful – in good and bad ways – attributes of being human. We can believe things, and our belief has consequences. So there's this rich period in life when a kid has childish beliefs, but acts with adult consequences, and that's when these crimes happen so often. It's perplexing and disturbing to us when we see a child do something vicious, and I wanted to explore that. Even remembering my own passions and thoughts and wild beliefs, starting at childhood but even through adolescence, when I believed something with such ferocity that it affected my life, and it affected the people around me. So what does that mean, and what's my relationship to it now? "Well, I've left it behind." Have I? That was me. How much responsibility and connection do I have to the actions and beliefs that I had at age 13, or age 19?

AC: You have that narrative, about this girl who does something, and what it means for her as an adult, and how do people approach her, and how does she see herself, those questions of institutionalization of children. Coming back into society, it's not just "oh, they have to learn how a cell phone works." Institutionalization is something much deeper.

OE: As I was writing it, there were a lot of different themes about childhood trauma, and the responsibility we have as adults to acts that we did, including something that went viral based on made-up stories that you whispered in the dark. Even more so as we were filming it. I got to work with all these great actors – almost all female actors. The only adult male is Austin [Amelio, The Walking Dead]. A lot of what came out as we were working through the script together, and talking through the issues, was issues of belief – not only what we believe having an impact, but who believes us. That came through time and time again, that there's a power to believing somebody. Perhaps it's the greatest gift you can give somebody, is to believe them. It's powerful. So throughout the story there are ghost stories and urban legends that are believed to devastating effect. But there are also people who are trying to say, "This is happening to me," kids who are saying that and who are not being believed – to equally devastating effect. What happens to somebody who's not believed? What happens when they're told that the things they've seen, the things they've heard, are fantasies, and they shouldn't talk about them? Those ghosts and monsters don't dissipate. They grow in the shadows and become stronger.

A version of this article appeared in print on April 5, 2019 with the headline: Our Darkness, Ourselves