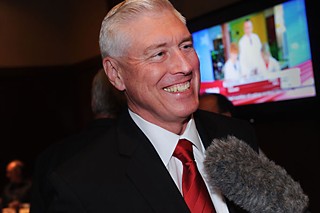 The race to replace resigned state Rep. Mark Strama in North Austin's House Dis­trict 50 is heading for a run-off, as the lone Republican in the four-way race, Mike VanDeWalle, took 39.2% of Tuesday's vote, and Celia Israel, the leading Democrat, won 31.9%, more than her Democratic competitors Jade Chang Sheppard (15.6%) and Rico Reyes (13.3%) combined. With signs the run-off might be pushed back to late January or even early February, it promises to be a protracted and contentious election.

VanDeWalle – a square-jawed, Republican political neophyte and Jollyville chiropractor making his first run for elected office – looks and talks like many Republicans already serving under the Dome, with his anti-regulation, anti-tax, anti-abortion, and anti-Obamacare platform. Israel, an avowedly progressive candidate whose experience with state government dates back to the Ann Richards administration, focuses on improving access to health care and education, expanding transportation capacity, and promoting civil rights. If elected, she would be one of the most progressive representatives at the Capitol. 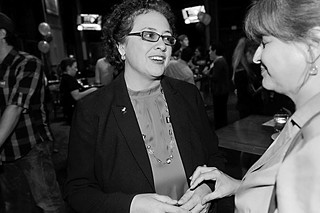 The contrast was evident last night at the campaigns' victory-ish parties. VanDeWalle's people reserved a back room at the McCor­mick & Schmick's location in North Aus­tin's upscale shopping center, the Domain – not technically inside the district – while Israel's campaign gathered in the cavernous Abel's North Grill and Tap Room on West Parmer Lane.

VanDeWalle, ever friendly, said the result was "pretty exciting. Humbling at the same time. The people of District 50 have been kind to me." A Republican heading for a run-off might have hoped for better than 40% against a fractured Democratic field. But VanDeWalle said he's happy with the result. "I think as more people get to know our campaign and what we're all about," he said, "I think we'll continue to be on the top side of this."

Israel, meanwhile, was happy to have outmaneuvered the attacks leveled against her by her Democratic challengers. She touted her campaign's ground game and organizational skills. "I'm relieved, I'm honored, and I look forward to rallying Democratic supporters and working to keep this a good progressive seat," she said. "So I'm hoping to solidify and unify the Democratic base."

How much time the campaigns have before the run-off could make quite a difference. Two months ago, the Travis County Board of Elections indicated a run-off would take place on Dec. 10, but guidance from the Secretary of State has pushed the date back to Jan. 28 at the earliest, if not early February. That would be almost two months after the filing deadline for the 2014 primary – a real mess, if any Democrat decides to challenge Israel. With HD 50 tilted the way it is, Israel emerges as the run-off favorite – but there's plenty of time for an upset.