As election day nears, the sparks are flying

With less than a week to go before early voting begins for the March primary that will select a slate of Democratic nominees for county government positions, the unusually heated three-way race for the Precinct 2 County Commissioner nomination continues to get more and more contentious, with the campaigns of Brigid Shea and Richard Jung trading shots at each other's candidates and campaign tactics, while Garry Brown has avoided the crossfire and hopes for a slot in what now looks like a probable run-off.

This election cycle, which also features a competitive County Judge race between former Pct. 2 Commissioner Sarah Eckhardt and former Democratic Party Chair Andy Brown amid a charged atmosphere of Democratic Party politics, has some observers bemoaning one of the most divisive primaries in recent memory – and hoping for a clean end next month.

In the Pct. 2 race, two campaigns are seeking to undermine the central appeal of the other. Shea, who was instrumental in passing the city's Save Our Springs ordinance, touts her "25 years of public service to the Austin area" on her website, hoping to establish herself as a voice of experience and knowledge. Jung, a charismatic, young immigration lawyer who's served on city government committees and has the support of Mayor Lee Leffingwell, touts his "fresh perspective" and "positive leadership." So while Jung's campaign hopes to make Shea's long public record and ties in the community a liability instead of an asset, Shea's campaign is questioning the authenticity and integrity of Jung.

The problem: Steve Yacktman is one of the primaries behind the Yacktman Asset Management investment advisory firm. (Ellyn Yacktman, meanwhile, is the inventor of a snap-on sippy-cup lid for aluminum cans.) YAM and the Yacktmans have a number of associations the Jung campaign thinks Democratic primary voters would find troubling. Steve Yacktman and his dad, Donald, each donated just under $10,000 to the campaign supporting Cali­for­nia's anti-gay-marriage Proposi­tion 8. They've also given big-figure donations to national Republicans like right-wing Sen. Richard Burr of North Carolina, Sen. Bob Bennett of Utah, and Sen. Scott Brown of Massachusetts. Closer to home, they gave $15,000 to Pct. 3 Com­mis­sioner Gerald Daugherty, the lone Repub­lic­an on the commissioner's court. There's also the fact that they've been receiving agricultural tax subsidies for the pecan trees at their home near Emma Long park, knocking what would be a hefty property tax bill down to zero. (Property tax issues have been a core part of Shea's campaign.)

Shea seems irritated and saddened by the whole issue. "We've known these people for 10 years. We know them through Little League," she says, adding that her husband used to coach the Yacktmans' child. "We never talked about politics [with them]. We talked about kids and baseball. We talked about their concern about wildfire threats. And about how long it took for an ambulance to get to their neighbor's house."

While Shea says she was surprised to learn about the Yacktmans' other political interests, she stresses: "I don't want the family to be attacked and I feel badly if that's going to happen. They're good people. I think it's outrageous that they're trying to smear these people. It doesn't have anything to do with this campaign."

Shea openly talks about her frustration with Jung's campaign. "I think they're kind of desperate, frankly. It has nothing to do with my 25-year history," she says. "And it's insulting to me, frankly."

However, Shea's campaign is raising questions about Jung, too. One issue revolves around Jung's spotty voting record. Jung previously helped run a semiconductor manufacturing supply company, which "required me to travel about eight months out of the year," he says. Democratic clubs, in evaluating candidates, hope for a candidate who's voted in more or less every general election, party primary, and primary run-off – which Shea and Brown can both more or less boast. Jung, on the other hand, voted in four of the six general elections from 2002 to 2012, but did not vote in a party primary during that period. He reports that he registered to vote in Oregon for a while during that time, but Shea's people say they can't find evidence of that using the proprietary DNC database VoteBuilder. All in all, the Shea campaign intones, Jung's connection to the precinct might be less than it appears – but Jung calls the matter a "red herring," and says Shea's questioning of Jung's party loyalty is "pretty annoying" and "particularly insulting."

There are countless other areas of contention. One involves Travis County Sheriff Greg Hamilton, who's something of a pariah among Austin progressives for what they feel is his overenthusiastic enforcement of certain immigration laws. All candidates in the race say they'll work with Hamilton to convince him to change his policies. But Shea has repeatedly hinted in public forums that Jung's campaign has approached Hamilton to tell him Shea's been badmouthing him on the trail, presumably to drive a wedge between her and Hamilton. "The sheriff told me he had been contacted by my opponent's campaign to tell him I had disagreed with his enforcement," Shea later clarified. That's something Jung's campaign flatly and unambiguously denies – he calls it a "vague, weird aspersion" and says he's tried to track down the source of the rumor without success.

Those hoping for a swift end to a brutal primary face the possibility that the Pct. 2 race will enter an also-nuclear run-off. The presence of Garry Brown, who's garnered support among Democratic activists but has run a poorly funded campaign, increases that likelihood. 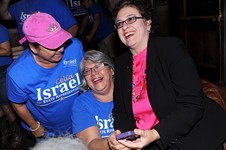