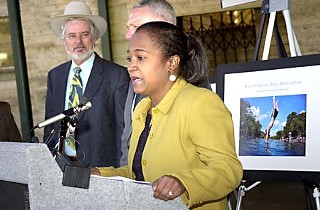 Another Texas Relays weekend sprinted to its finish Saturday afternoon. Other than battling strong winds, the high-profile track-and-field events at the University of Texas' Myers Stadium went just fine. But off the track in Austin, there were flares of uptight resistance to the annual influx of thousands of mostly African-Ameri­can visitors. The sparks raised questions – again – about the city's too often less-than-progressive track record on race.

News first broke on Thursday, April 2, that Highland Mall – a destination for younger members of the Relays crowd, as well as young people from the surrounding North Austin neighborhood – would be closing early that Saturday. Declared a press release from mall general manager Jeff Gionnette, "This year, the professional and municipal security resources utilized in the past to oversee the anticipated crowds are not available to Highland Mall" (likely a reference to the partially abandoned mall's financial condition). "On Saturday, April 4, the mall will close at 2pm because the safety and security of shoppers and retailers is top priority."

Reaction to the announcement was swift. "Highland Mall, the management there is incompetent; I think that's fairly clear," said Nelson Linder, president of the Austin branch of the NAACP. "I think also they're xenophobic; that's fairly clear. They're inconsiderate and really have no idea of how their decisions can impact overall relations in this city. It's embarrassing for the city that those kind of people work here, with that kind of mentality, but I think rather than just being angry, we need to respond." Linder didn't call for a formally organized boycott but did urge shoppers and patrons to "pretend that they're still closed and take your business elsewhere and put them out of business as fast as possible."

Then on Friday, the Austin American-States­man reported that two Downtown clubs, the Flamingo Cantina and Emo's, would close over the weekend. Emo's, known for its punk and indie rock shows and audiences, attributed its decision in part to South by Southwest fatigue (the club usually closes for a week after the Festival but hadn't this year because it had some shows lined up) and in part to finances, explaining that most of its regular clientele avoids the crowded Downtown over Relays weekend. (Emo's actually left the bar open through the weekend but did not book any bands.) Reported remarks by Flamingo Cantina owner Angela Tharp Gillen were more inflammatory; she called Sixth Street "kind of dangerous" over Relays weekend and said, "It seems like it's a big gun party in the streets." (For more on the Texas Relays fallout, see "Off the Record.")

Attempting to defuse the tension, Austin City Council Member Sheryl Cole held a late-afternoon press conference at City Hall on Friday. Flanked by Linder and prominent African-American officials, including City Manager Marc Ott and Assistant City Manager Michael McDonald, Cole offered an official welcome to Relays visitors. She also reversed a less-hospitable gesture from the city: an inordinate amount of street closures effectively blocking off Downtown. By Friday, I-35 exit ramps for Sixth Street, on both sides of the freeway, were closed, along with the southbound exit at Cesar Chavez. But until Cole's intervention, the city planned to close all southbound exit routes to Down­town between Cesar Chavez and the MLK-15th Street lower-deck exit. "They were treating it differently than we treated South by Southwest and the Pecan Street Festival," Cole said later. "In light of the context of Highland Mall closing and some Sixth Street businesses closing, now we're closing off the freeway? I don't know how much control we have over the businesses, but we needed to send a message that all our tourists are welcome here. We certainly don't need to be adding to the chaos," said Cole, calling the business closures "offensive."

As for Relays weekend itself, Highland Mall's safety concerns seemed misplaced, as there was no marked uptick in violence or discord. Perhaps a more substantive question isn't whether Relays visitors are likely to run riot at Highland Mall but why youthful African-American visitors have traditionally been drawn there in the first place. One answer is that – at least for young people – there's really no place else. Austin's African American Quality of Life Initiative, initiated by the City Council in 2005 in reaction to callous police response to a fire at African-American nightclub Midtown Live, has noted that a lack of a lively black social scene is one of the reasons identified for a relative lack of growth in Austin's African-American population. (The club, a major Eastside draw for young blacks, has not been rebuilt.)

Some popular events have arisen in relation with Relays weekend: The city of Austin is a co-sponsor of the Urban Music Fest­iv­al, which began at Auditorium Shores in 2006, and the Travis County Expo Center hosted veteran Texas rappers Scarface, Bun B, and Z-Ro on Saturday night.

Amid some of the media hand-wringing over the weekend, it wasn't noted – but should be – that while the paler parts of Austin may not be accustomed to African-American youth culture's affinity for trunk-rattling cruisers and boisterous, in-the-street socializing, that doesn't mean the city as a whole is disapproving or threatened by it. It does mean, however, that the city needs to do a better job in welcoming 2010's Texas Relays and encouraging the revival of a social infrastructure for the African-American community that's here the rest of the year. "I think we could do better," says Cole. "There's room for improvement." 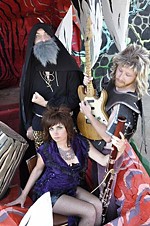