To the beating hearts of a great city 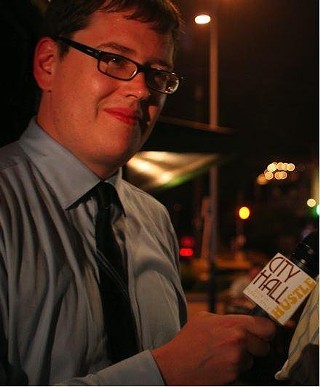 The Hustle on election night, 2008 (Photo by Jana Birchum)

The City Hall beat here at the Chronicle comes with a lot of perks: endless pots of black coffee, a front-row seat at the several dozen City Council candidate forums prior to each election (often with more candidates present than ostensible "neighborhood association" or "Democratic club" members), and an in-depth and altogether-too-intimate knowledge of different zoning designations.

But the real reward is the work itself. Cleaning out my detritus-strewn cubicle in my final days, there lies one of the dossiers I've compiled over the years: Water Treatment Plant No. 4. (Maybe you've heard of it?) I reviewed the panoply and found – only since I started in 2005 – the decommissioning of the Green Water Treatment Plant Downtown, a briefly floated proposal to site the new WTP4 in East Austin, outdated info on additional false starts, and more freshly obsolete expense evaluations of what it would cost to mothball the far-advanced plant.

But none of that – not even typed notes from a meeting with a former council member alleging a nefarious web of greedy contractors, expedient city managers, and water utility patsies – floored me as much as another discovery. Into my folder, someone had slipped the original WTP4 file: handwritten notes, Lower Colorado River Authority meeting minutes, and clippings from ancient Austin American-Statesmans and assorted deceased publications. (I'm still not entirely sure whose notes they are, but for irony's sake, I'm hoping Daryl Slusher's.)

The first words I glimpsed were in a headline. There's no date, but judging from neighboring clippings, it's about 25 years old. And it reads: "WTP-4 to start soon."

It was a heady reminder that the more things change around here, the more they stay the same.

WTP4, the latest big-box opening, the advent of Formula One: No topic's more rehashed than the latest existential threat to Austin's – for want of a better word – vibe. And all too often, "Keep Austin weird" means "Keep Austin like it was when I moved here 35 years ago," apparently a magical time when the city paid you rent to live here and foamy waves of Lone Star lapped at the shores of Town Lake.

Reminiscence is well and good, but the Hustle's often been left wondering whether Austin's terminal nostalgia, sheathed in hegemonic boomer triumphalism, persistently keeps us blind to the bigger picture. The world around us is on fire. Income inequality has grotesquely swelled into levels that would make robber barons blush. And yet, all too often at City Hall – on the dais and among the regulars in chambers – we obsess over the most trifling gewgaws, like (notoriously) which email address a council member used to send a message. Why does a Board of Adjustment recommendation for an extra driveway into a country road development draw dozens of speakers, or a Central Austin zoning spat drag on for months, while a resolution reining in predatory payday lenders passes with a minimum of community awareness?

Like many others, the Hustle still holds hope for single-member districts, or some comparable form of geographic representation to shake us from our self-centered political malaise. It may yet happen – and despite the inherent imperfections of districting, the move's long overdue for a city of our size and stature (and a welcome step toward slaying once and for all our outdated small-town mentality).

I could offer more recommendations – which personally feel like so much common sense – but in a civic context under which process has trumped policy to the point of becoming an end in itself, these are apparently controversial: moving elections to November to bolster turnout, for example, and raising the campaign contribution limits. (Despite all the "get the money out of politics" sanctimony, lower local limits mostly reinforce the dominance of candidates who can afford to self-finance their own campaigns.)

Yes, despite a changing skyline, despite a swelling population, despite the preponderance of an outdated, antiquated form of governance, Austin is still a great place (and believe it or not, has a relatively decent government). That's not to say that we can't do a hell of a lot better in regard to our less fortunate, and especially in regard to our African-American population (geographically dispersed, disproportionately policed, and subject to embarrassing citywide freak-outs, e.g., the 2009 Texas Relays). But no campaign season bogeyman can ever fundamentally alter our best attributes as a city: our people.

Here, I briefly need to thank everyone who's played a part in this column over the years: those inside and outside the city, both working to better it, and everyone whose read and interacted with the Hustle over the years. I also must thank the Chronicle family and the role everyone played in giving my voice an unfettered platform. And specifically, I need to thank the entire News staff, past and present, and my friend and mentor Michael King, for whom my gratitude is impossible to state.

That's why I feel bad telling him this: The WTP4 file is all yours.

Hustle no more. You can keep up with me on Twitter @WellsDunbar. Please do, as I'll have lots more to say.