If a club closes Downtown, does it make a sound? The answer proved to be a deafening "yes" last weekend after Flamingo Cantina, not to mention Highland Mall, closed for the week of the annual Clyde Littlefield Texas Relays, citing a variety of issues, not limited to fatigue from South by Southwest last month and an expected loss in revenue (see "Highland Mall Hysteria Over Texas Relays"). Emo's, meanwhile, elected not to host live music, though its bar remained open. While both venues have attempted to cater to the event in past years – most notably the hip-hop bill of RJD2 and Dälek at Emo's in 2008, which tanked – the act was met with public disapproval from City Manager Marc Ott and the Austin chapter of the NAACP, among others. A media feeding frenzy ensued.

"I'm disappointed in the decisions of some of the Sixth Street business owners and of Highland Mall," City Council Member Sheryl Cole said at a press conference on Friday night.

"Money is green," countered Emo's owner Frank Hendrix. "When you make a business decision based on finances and all of a sudden it's turned into a black-and-white issue, it's ridiculous. If bands can't get down there and off-load and our crowd can't get down there to park, it's not worth losing money."

According to the Austin Convention & Visitors Bureau, the Texas Relays draw about 40,000 people and generate approximately $8 million for the city. Josh Cisneros, general manager of Spiros Amphitheater, says last weekend was the club's most profitable and smoothest Relays weekend in five years, attributable to a higher cover (roughly 30%), the installation of a barricade outside its entrance, and more than 20 security guards. As a result, Spiros escorted out only two individuals, as opposed to the "30 to 40 people per hour" from years past. "Without [added security], it would've been a joke," Cisneros states. "I would've had to close, because it would've been too many people."

Spiros' precautions were in response to the event last year, when the club closed after an alleged gunshot caused a stampede toward the venue's entrance. Flamingo Cantina owner Angela Tharp Gillen cited similar reasoning for closing. In fact, Cisneros estimates that he heard some seven gunshots last weekend or, as he carefully corrects himself, "sounds resembling that of shots fired up in the air." According to the Austin Police Department, one man was arrested in the parking garage on Seventh and Trinity for discharging a firearm in a municipality last weekend, though there was a decrease in citations and arrests Downtown overall.

The Sword and the Stoned 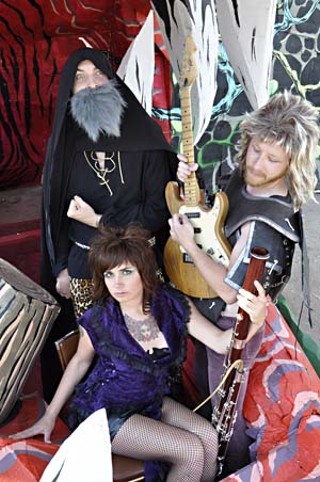 Forget the Decemberists' new The Hazards of Love. Arthuriosis is a locally produced heavy metal opera based on the legend of King Arthur that gets medieval like Spinal Tap in search of the Holy Grail or Kiss Meets the Phantom of the Park transported to the Dark Ages. The show was actually inspired by Manowar's "Achilles, Agony & Ecstasy in Eight Parts," a 30-minute saga about the Trojan War. "It's super epic and metal; they're totally amazing musicians, but the shit they do is so over-the-top that it's kind of funny," enthuses co-producer Zenobia Taylor from the Getalong Gang Performance Group, previously responsible for Ben Franklin: A Rock Opera. Originally envisioned as a concept album, Arthuriosis comes to life with the help of a fourpiece band, Council of the Beast, which might pass for the Sword at a Halloween party. Taylor hopes to make a studio recording of the production and stage the show in an actual rock venue: "We have to at least use the wigs again, 'cause they're awesome." Arthuriosis goes to 11, Thursday-Saturday, April 9-18, 8pm at the Blue Theater (916 Springdale). Earplugs provided. 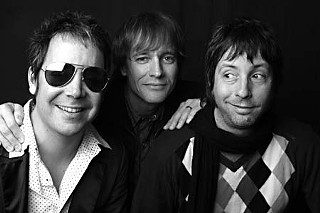 "Labels aren't that good at moderate success, but moderate success is still success," offers Fastball's Miles Zuniga. "It doesn't have to be all or nothing. In fact, that's detrimental to creativity." He should know. The Austin pop trio struck platinum with 1998's All the Pain Money Can Buy thanks to "The Way" and earned two Grammy nominations, only to watch its next two offerings, 2000's The Harsh Light of Day (Hollywood) and 2004's Keep Your Wig On (Rykodisc), fall far short of the previous mark. Inspired by fans via MySpace, Zuniga and bandmates Tony Scalzo and Joey Shuffield decided to take matters into their own hands and self-release their latest, Little White Lies, which is commemorated Tuesday with a Waterloo Records in-store that prefaces an 18-date national tour. "For the first time in our careers, we're in control of our own destiny," assures drummer Shuffield, who helped pass the time in Young Heart Attack. That creative control seeped into Little White Lies. "Being in a band this long, you start to learn what you do well," Zuniga reasons. "Things are better creatively because we're much more open to each other's ideas and experimenting. I feel like now we're just getting started."

You Forgot It in People The Eastern Sea may be Austin's answer to Sufjan Stevens. Led by the imagistic lyricism of Matthew Philip Hines, the local collective unfolds pastoral portraits of modern urban experience. "I'm really fixated on setting," concedes Hines, who graduates valedictorian of his class this semester at St. Edward's University with a double major in English writing and religious studies. "In every song I write, I try to get the setting down first. Everything tends to develop after the creation of a place. I'm really drawn to the idea of a bustling city." The fluctuating indie outfit is currently working on a follow-up to its stellar debut EP from last year and splits a bill and vinyl single with Houston's News on the March Friday at Lamberts with Followed by Static and One Hundred Flowers. "I like that Broken Social Scene can play with 20 people or five people," Hines adds. "I'm really attracted to being able to do this in any sort of configuration."

• Austin City Limits, which received a 2009 Texas Medal of Arts award at the Long Center on Tuesday, is pulling out all the stops for its 35th anniversary season. Producer Terry Lickona has confirmed that Green Day, Elvis Costello, and Dave Matthews Band are all on tap for tapings this summer, along with sessions from the Beastie Boys, Sonic Youth, Madeleine Peyroux, and Austin's Okkervil River.

• Bongo fever: Vocalist/saxophonist Napoleon Murphy Brock of the Mothers of Invention joins the Paul Green School of Rock this Friday and Saturday at Red 7 for a crash course on the avant-garde freak-outs of Frank Zappa, 7pm.

• Tim's Porch at the Backyard, a scaled-down version of the amphitheatre modeled after its original configuration from 1993, opens on Friday with Asylum Street Spankers, followed by John Gaar & the Hopeful Souls on Saturday. "I really missed the intimacy of the venue," says Direct Events' owner Tim O'Connor, who will focus primarily on regional acts. Groundbreaking for the new Backyard down the way on Highway 71, meanwhile, should take place no later than July 1.

• In the latest issue of Rolling Stone (Lil Wayne cover), David Fricke singles out the Strange Boys as one of five breakouts from SXSW 09: "These local stars looked like they hit SXSW straight from gym class but played an original racket with flashes of the Libertines, the R&B-era Kinks and, in singer-guitarist Ryan Sambol's distorted yelp, a young Paul Westerberg."