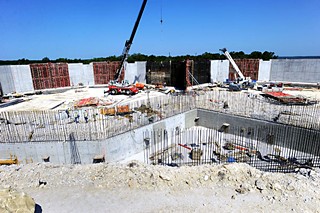 1) Opened Pandora's Box A "walking quorum" complaint to the County Attorney's Office from local activist Brian Rodgers – bolstered by flame-fanning by the Austin Bulldog – put council communications under microscopic scrutiny, changed the way meetings are held, and drowned city staff in a flood of open records requests, all while undermining cooperation among an already fractious council.

2) Email Election The only action on the May ballot, Kathie Tovo reminded voters it's not impossible to dislodge a sitting council member. Tovo seemed to be running against Formula One more than against Randi Shade, but unflattering remarks about local activists Shade had sent via email – culled from open-records fishing expeditions – certainly didn't help.

3) Troubled Waters Water Treatment Plant No. 4 could be pumping 150 million gallons a day two decades from now, and there will still be calls to mothball it. Following Tovo's election, the WTP4 opponents and agnostics held sway on the dais, commissioning a report on the costs of a construction shutdown. Surprise – it reached into the hundreds of millions (dollars, not gallons).

4) By Any Other Name With a name change (Austin Resource Recovery), adoption of a zero-waste master plan, and head-scratchingly protracted recycling contract negotiations with Texas Disposal Systems, the department formerly known as Solid Waste Services had a big year – even if it didn't change its name to the Fred Durst Society of the Humanities and Arts.

5) Few Votes Is Best In one particularly tense moment for a council that faced more than its share this year, the opportunity to move local elections from May to November failed on a 4-3 vote, with recriminations about disenfranchised voters, debate over the sacrosanct nature of the City Charter, and more polarization of the dais.

6) Infinite Free Parking WTP4 wasn't council's only mulligan in 2011. The decision to revisit the admittedly unpopular decision to charge for public parking Downtown on weekend evenings showed that while parking is a limited resource, political posturing isn't.

7) Caging Sharks Starting where limited measures from the state ended, an ordinance by Council Member Bill Spel­man put predatory lenders on a shorter leash – a concrete reminder that government can protect the most vulnerable.

8) It's Rainey-ing Bars A stalled economy and relaxed zoning launched a brace of cocktail lounges along residential Rainey Street, instead of the mixed-use development (and parking?) the city hoped for. Lustre Pearl was a sound permit too far, as the city retreated to reconsider how to balance growth and neighborhood quality of life in the central city district.

9) No Profit in It The biggest undertaking for council this year was also the most thankless, as the city competitively rebid social service nonprofit contracts for the first time in well over a decade – and made sausage in real time on council's Public Health and Human Services Committee.

10) Best-Laid Plans The Downtown Austin Plan was adopted at long last, amid simmering questions over density in the urban core, redevelopment in the Warehouse District, and the future of the Red River music scene. The Imagine Austin Comprehensive Plan keeps working – along with a last-minute scrub dumped upon the beleaguered Planning Commission.

Hustling Away...
A brief look back from your City Council columnist