Slaughter Lane, where the big Sept. 11 double-fatality wreck took place, is one of the city's most raced-down streets, according to APD 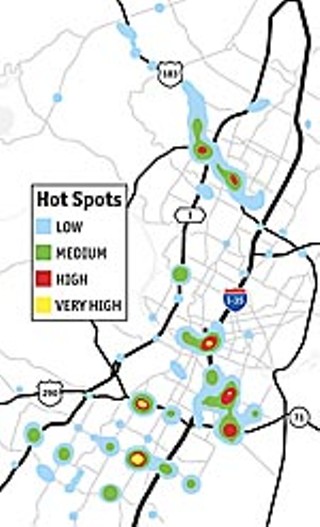 Austin roads most plagued by street racing according to APD, 2004-2006

APD detectives with the department's Vehicular Homicide detail have filed racing charges against two men in connection with a Sept. 11 double-fatality wreck on Slaughter. Police say 19-year-old Christopher R. Chavarria and 23-year-old Rogelio P. Carachure were racing eastbound along Slaughter when a Ford truck, heading northbound on Narrow Glen Parkway, crossed in front of them, making a left turn, westbound onto Slaughter. Sources tell us that Carachure, who was driving a green BMW, and Chavarria, driving a white Acura, were traveling at nearly 100 mph just before each of their cars plowed into the side of the Ford. The truck's driver, Myrton Lynn McDonald, 68, died at the scene of the crash; the four occupants of the Acura were transported to Brackenridge hospital where one, 16-year-old Stephanie Chavarria, died. Carachure left the scene before police arrived. Carachure and Chavarria are charged with racing, a second-degree felony; Carachure was also charged with failing to stop and render aid, a third-degree felony. Chavarria was arrested Sept. 22; at press time, Carachure is still at large.