Tweet
print
write a letter
Las Manitas and Escuelita del Alma have recruited former Austin Mayor Gus Garcia to join the home team in negotiations over the future of the iconic "small little restaurant" and child care center Downtown. Adding a heavy hitter like Garcia to their dugout helps even the odds in negotiations with notorious gun-for-hire real estate attorney Richard Suttle, who represents developer White Lodging Company. The hotel operator intends to boot out the tenant businesses, tear down the older buildings that house them, and put up a new Marriott megahotel complex.

"Former mayors don't get involved in just anything that comes down the pike," said Jim Walker, who's heading up the Escuelita parent and staff group. Escuelita director Dina Flores said that while the businesses are minimally compensating Garcia, his involvement is "very much a labor of love."

To date, Escuelita has been unable to get Suttle to provide a lease extension as requested, to ensure continuity of child care at least through next August for more than 100 Escuelita families. "They are playing a game of chicken with us," said Flores. "Do you think White Lodging really wants to go on record as throwing 100 children out on the street on December 31?"

City of Austin advisers and staff are showing strong interest in the fate of the historic buildings and their tenants. At this Monday's meeting of the Historic Landmark Commission, a draft of a new "iconic preservation" ordinance was introduced by Dave Sullivan of the city Planning Commission; the discussion referenced Las Manitas. The proposed new "iconic" designation could be requested by a business owner located in leased space, like Las Manitas and Escuelita; provisions would prevent the landlord from retaliating against the tenant. From the city's Historic Preservation Office came a timely early report from Steve Sadowsky on recent research into the 200 block of Congress. To date, the office has found historical significance dating back to around 1915 for the buildings that house the cafe, day care, and Tesoros Trading Company – all slated for teardown.

This Friday, Sept. 29, from 5:30-7:30pm, a Save Las Manitas and Escuelita fundraiser ($5 suggested donation) will be held at neighboring Copa Bar and Grill, 217 Congress. The musical lineup includes Johnny Degollado y su Conjunto, the children of Escuelita singing "La Bamba," and – not to be missed – a cameo star turn by Gus Garcia himself. Maybe he'll sing a love song. 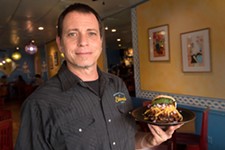 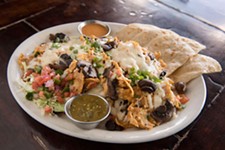