Baxter leaves the Lege, and would-be state reps may have to jockey for position early 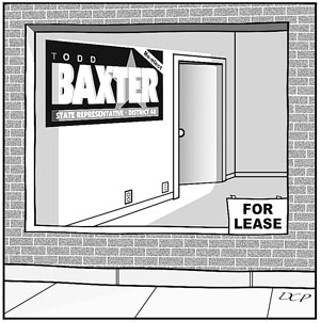 Two weeks ago, a Democratic victory in House District 48 seemed almost certain, until the man chiefly responsible for this unified optimism – GOP incumbent Todd Baxter – unexpectedly took himself out of the running.

Baxter's resignation, effective Nov. 1, is largely viewed as a strategic decision by Republican Party bosses to remove the vulnerable candidate and restructure the playing field to their advantage. While popular with the party leadership, Baxter's votes favoring private-school vouchers and his refusal to return campaign money from Tom DeLay's tainted political action committee didn't exactly put him in good stead with his district; and they outweighed his positives, such as his vote against toll roads and his unflagging energy on the campaign trail.

Enter Ben Bentzin, the Republicans' heir apparent to Baxter's seat. As a well-connected businessman, community booster, and former Dell executive, Bentzin is regarded as someone who can swoop in on quick notice and re-energize voters in this west-of-MoPac swing district. More importantly, Bentzin's Dell-ionaire status enables him to underwrite a campaign on the fly, without having to fret about raising gobs of cash within a short time frame.

With Bentzin in the picture, nothing would satisfy Republicans more than a quickie election, to seat a GOP incumbent before the general election next November. Initially, the idea was that GOP Gov. Rick Perry would call a special election before the end of the year, forcing Democrats to scramble to get their act together. But it's not certain that Perry will move with such haste, particularly since he let District 143 in Houston go for six months – including time spent in special sessions on school finance – without a representative to replace Democratic Rep. Joe Moreno, who died in May. (Voters will choose Moreno's successor Nov. 8.) Another option under discussion had May as a possible election date. But that could foul up the Lege's special session on school finance, also expected in May. If the election were to go to a run-off, in June, the delay could leave House Speaker Tom Craddick one GOP vote shy of an education package. Naturally, Craddick didn't have these same concerns about the empty Moreno seat.

In a statement last week, Baxter said he was moving on to spend more time with his growing family. He stressed, "I have chosen to step down for personal reasons, not political calculations." Baxter said he would leave office right away so that voters would be allowed to choose a representative "at the earliest possible date."

But what's the hurry, asked Democratic strategist Kelly Fero. "There is no legitimate reason to call a quick turnaround election that favors big checkbooks over good ideas." While Baxter's departure and Bentzin's immediate entry into the race sounds like a coordinated turn of events, Ted Delisi, a political consultant to both men, says there was no coordination whatsoever – "there was no pressure on [Baxter] to pull out [and] there was no sort of collusion" with regard to the timing of Baxter's announcement and Bentzin jumping into the race. "That's just what the Democrats are saying." All Baxter did was inform Bentzin of his decision, he added.

It's true that Bentzin doesn't carry the political baggage weighing Baxter down, but he does have a record of turning off voters, as evidenced by his costly, bruising loss to Sen. Gonzalo Barrientos in 2002. Bentzin, then a barely known millionaire trying to take down a veteran politician, went on the attack with a barrage of TV ads featuring police video of the senator's arrest on a driving-while-intoxicated charge. The ads were roundly criticized, needless to say.

Republicans will have a second choice in this election – Robert Howden, a former Perry spokesman and the former state director of the National Federation of Independent Business.

Without Baxter to kick around any more, the political dynamics change more drastically for Democrats, who until now were solely focused on the March primary. As of now, two Democratic candidates – Andy Brown and Donna Howard – are said to be readying for a special election, no matter how soon it gets here. It's uncertain whether Kathy Rider, another primary candidate, would jump into the running for a special. Meanwhile, there was talk last week from Brown and Howard supporters that one of them should pull out so Democrats can get behind one candidate. But so far that discussion hasn't gone anywhere. There was even talk of recruiting Kelly White, who narrowly lost to Baxter in 2004. But White is on Howard's campaign team now, and her ship-jumping might not go over too well.

The biggest question now is whether Perry will choose to set an early election date within the next 35 to 50 days – the time period deemed an "emergency" – or whether he'll delay the contest until after the March party primaries. "That is entirely in the hands of Rick Perry and his fellow partisans," said Fero, a consultant to Howard. He couldn't resist a facetious jab: "They will obviously take into account what would be best for the district, for Texas, and for humanity as a whole."