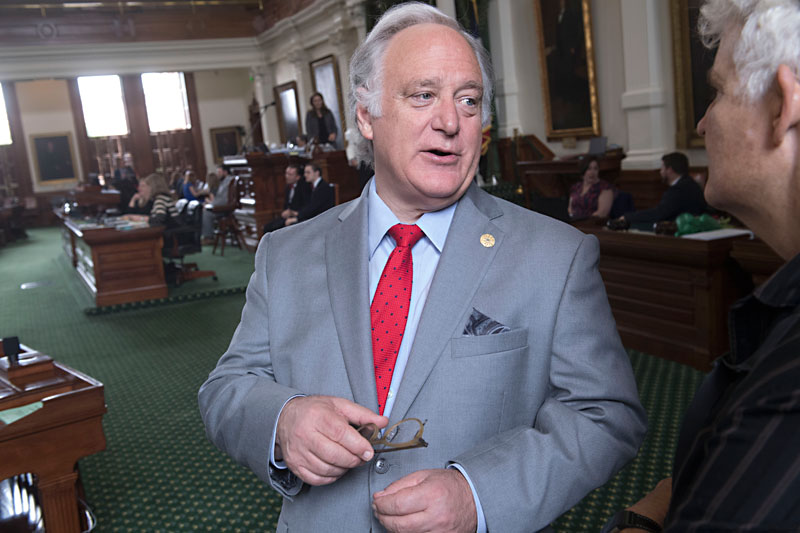 Two weeks after Kirk Watson announced he would retire from his state Senate seat, no one has officially stepped forward to announce plans to run for the office – but several prospective Democratic front-runners have taken big steps in that direction.

On Thursday, Feb. 27, Rep. Eddie Rodri­guez announced the formation of an "exploratory committee" to look into his run for the SD-14 seat, which covers most of the city of Austin as well as Bastrop County. This allowed Rodriguez to focus on closing out his own primary campaign (see "Long Lines and Close Races Defined Super Tuesday in Travis County"), and the dean of the Travis County House delegation intends to announce a decision soon. As an elder in the Texas House, which could flip to Demo­cratic control, his campaign resources could be helpful in turning the chamber blue, and his legislative acumen would be missed by House Dems in the next Legislature.

In a press release, Rodriguez said, "As I determine how best to serve our communities across our region and state, I am honored that my colleagues and community leaders are offering their support and guidance. I look forward to finalizing my decision in the coming days." His committee co-chairs are three colleagues who had also considered a run for the seat – Reps. Donna Howard, Celia Israel, and Gina Hinojosa – sending a clear message to other contenders that the delegation has his back.

For one, he would not trigger the "resign to run" provision of the Texas Con­sti­tution, which requires serving elected officials seeking a different office to resign if they have more than 13 months left in the current term. Casar's term expires in January 2021. (For the same reason, Mayor Pro Tem Delia Garza has been able to serve on Council while running for county attorney.)

The memo also addresses a claim from former Travis County Judge Bill Aleshire – a self-appointed nemesis of both Casar and Garza – that Casar is ineligible to run for the Legislature as the holder of a "lucrative office" (i.e., a paid position) unless he resigns. Aleshire argues that a CM's resignation does not become effective until a new person is elected to the office or the incumbent is elected to a different office, neither of which would happen before a May special election. Aleshire notes that in the most recent case testing this provision of the Texas Constitution, in which Eagle Pass Mayor Ramsey English Cantu resigned to run for the state Lege, a new mayor was elected on Feb. 1 and sworn in before Tusday's primary. Cousar writes that Casar is "eligible to become a candidate for [SD-14] if and when" he resigns from Council and his "resignation becomes effective under the law." However, Cousar crucially concludes, Casar's appointing a treasurer and raising funds will not require him to resign now.

Meanwhile, Travis County Judge Sarah Eckhardt continues to mull a run for the office. She told us on Monday, March 2, that she was still "strongly considering" launching a campaign. But the stakes are highest for her, one reason being that she would have to resign as county judge to run, because her current term does not expire until 2022.

Moreover, Eckhardt explained to us, she serves as chief executive of the county government, unlike Casar and Rodriguez, who serve as members of larger legislative bodies. County commissioners discussed the implications of Eckhardt departing her office early in a March 2 executive session; they're scheduled to deliberate privately on the matter at their next meeting on March 10.

"My decision has a big impact on my organization," Eckhardt told us, "so I want to fully explore that along with the rest of the Com­mis­sioners Court. But the time frame for making a decision is so compressed, so I expect to decide very quickly after that second executive session."

As of press time, no GOP candidates have stepped forward to run for the seat, but the party's county chair, Matt Mackowiak, insists they will field a candidate. He told us the local party has been focused on the HD-47 primary, where former CM Don Zimmerman and Jennifer Fleck have advanced to a May run-off for the chance to unseat first-term incumbent Rep. Vikki Goodwin in November. Former CM Ellen Troxclair is the favorite to take on the Senate challenge, per Mackowiak, but she's building a brand as a conservative author and podcaster, so maybe she won't have the time.