The Ends, John Schooley & His One Man Band, Hard Feelings, Grand Champeen/Ol' Yeller, and My Education

Back before the Bush oil barons seized control of the world's fossil-fuel reserves, there were these little records called singles -- just a gob of petroleum splat flat 7 inches across, with a song on each side, maybe two. Primitive, but effective. Same goes for the ear-bleeding buzz-saw blues of John Schooley & His One Man Band, whose four-song 45 (rpm, the speed one sets their turntable to for singles) shreds. "Drive You Faster" kills, "Good Morning Little Schoolgirl" slaps, but "I Wish You Would" delivers an ax/harp/trash-can electro-backwoods wail that's truly murderous. Brought to you by Bern, Switzerland's Voodoo Rhythm Records. Schooley's night job, Austin's Hard Feelings, backs Spike Penetrator for Australia's Dropkick Records, whose double-disc package by local Billy Bishop is prime. "Cheapass Landlord" smears its gap-toothed chorus on the walls of CBGB's bog, while "I've Lived Too Long" is horn-honked punk pathos from the veteran underground inspirator. "Thanks a Lot (Shithead)" is the Mike Maraconda mix, and a flat-out, middle-finger hall-of-famer. The Ends, an all-star Austin fivepiece broken off Red River rawk & roll rats like the Materialistics, Slum City, and the Ritchie Whites, also reside in classic 1977 spew, their "Teenage Detox" 7-inch a lethal speedball of cocaine tempos and hoarse vox. The A-side is pure anarchy, but second B-sider "Room for One" gallops to the gate like a true triple crowner. Minted right here in Austin, Texas, by Super Secret Records. The recent split from Grand Champeen and Ol' Yeller on A-Town's Glurp Records is another homegrown gusher. The local bar-band grandstanders in Champeen let the beer fly on the chunky "A Major and a Miner," while their Minneapolis counterpart gives 'em a run for the tip jar on "Reward." All you need is a Shiner and smoke to throw down with this one. Last but coming in first at the dance-off, My Education's "Concentration Waltz" is a stunning, indie-rock cathedral of stained-glass guitars, "muscular viola," and violin that explodes in the sky like the Fourth of July. The flip, "Plans A Through B," is no less Bubble-rific, also recorded by "Frenchie" Smith at the local studio for the UK's Norman Records, and makes this brooding, bashing local quintet part and parcel of Austin's current musical renaissance. Down with Bush, up with vinyl. Visit: www.voodoorhythm.com; www.dropkick.com.au; www.supersecret.com; www.glurp.com; www.normanrecords.com, or check Austin's vinyl wal-marts: Waterloo Records, Antone's Records, and Thirty Three Degrees. 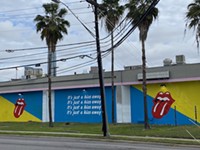