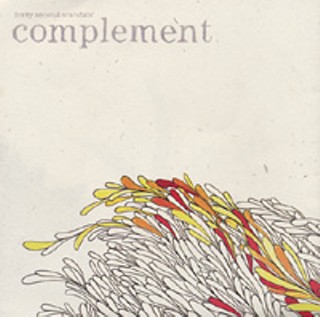 Complement (Missy's Room) What can you say about the Forty Second Scandals in 40 seconds? 1) They're an Austin band that sounds a lot like Chicago. 2) They have six members and switch instruments a lot. 3) They're intimate with the discography of experimental/emo scion Tim Kinsella (Cap'n Jazz, Joan of Arc, Owls, Friend/Enemy). 4) They're a lot more mellow on disc than live. A couple more seconds and you could toss in that Forty Second Scandals are one of Austin's best unheralded bands. Complement is actually their third album, though judging by the lack of fanfare surrounding their shows at the likes of the Red Eyed Fly, few people have heard the first two. That's a shame, because Forty Second Scandals are an AusTex commodity, able to blend emo-rock exuberance with jazz-informed sensibilities and the willingness and wherewithal to experiment. Complement features vibes, trumpet, slide guitar, keyboards, and samples weaving into a mix that sounds a bit like the Sea and Cake's more chilled moments. The vocals are mostly low in the mix, though occasionally some stream-of-consciousness wordplay surfaces as a focal point. It's not until the album's ninth track, "The Same Thing Is," that they rain down the rock, pushing some Cap'n Jazz-style melodic slop-rock harnessed through a modern post-rock filter before colliding with the Chicago Underground sounds of "The Same Thing As." Complement doesn't capture the spark of Forty Second Scandals' spasmodic live shows, but it's a worthy document of a band with some real chemistry and chops. (Forty Second Scandals play the Mercury Thursday, May 22, with the Via Satellites.)