Can Austin planners and the City Council ever bring an end to the local transportation wars?

Bikes on a Road to Nowhere?

The GOP's capture of the Texas House may have been accomplished with less than scrupulous campaign fund dealings.

Wal-Mart or No, Council Defers to Endeavor's Domain

Only Daryl Slusher votes against the city's $37 million tax rebate for a North Austin "urban village."

Killer D's Come Home, But the Saga Goes On

The Ardmore walkout reverberates at the Capitol.

Bikes vs. Cars at CAMPO

Lights On, Still Nobody Home: Entering the final innings, the lege scorecard is filled with zeroes

McCarthyism rears its ugly head; and taxpayers pay for a Bush campaign commercial. 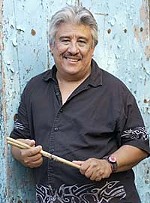 The Hole in the Wall and the Motards return, and things get smoky at City Hall

Songs for Blaze, a Friend of Ours: BFI Volume 4

Riddle Me This, Batman

The last in the Chronicle and Alamo Drafthouse's Eat, Drink, Watch Movies series.

Man on the Train

Austin Symphony conductor Peter Bay has tremendous regard for both Sergei Prokofiev's score and Sergei Eisenstein's images for the 1938 film Alexander Nevsky, and as he prepares for a live performance of the score as the film is being shown, he talks about this remarkable fusion of image and music and what's involved in performing it live.

Building a City on a Stage

Epic is not something often attempted in the theatre, much less by small arts groups, but with Orange, Refraction Arts Project is telling the epic history of a fictitious city across three time periods in four overlapping storylines, with the participation of 15 playwrights and 25 actors.

A pair of dancing Hungarian sisters led to a trio of Obie Awards for sometime Austinites Katie Pearl and Lisa D'Amour and their friend and collaborator Kathy Randels.

Multitalented Rob Nash has reshaped his "Holy Cross Quadrilogy" -- tracking three friends through four years at a Catholic high school in Houston -- into the evening-length Holy Cross Sucks!, and while the abridgment causes too much to happen too quickly, the result is still as funny and memorable as the best and worst of schooldays.

Is it true that women with osteoporosis should not supplement with more than 6,000 IU daily of vitamin A? What about the vitamin A in food?