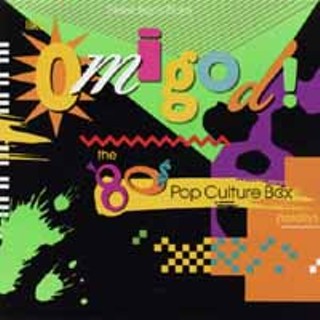 (Rhino) If there's a finite number of ways to rearrange the New Wave hits of the Eighties, it's a sure bet Rhino Records is going to keep working at it until they hit that number. Even before the Eighties retro movement hit in earnest, it seemed that the label was going for some sort of record as to how many different CDs they could put out with "Video Killed the Radio Star." Fortunately, in many cases, their tastes have been excellent, especially in their extensive collection of single-disc New Wave compilations. Hidden gems were given equal sparkle with old workhorses like Devo's "Whip It" and the Eighties dance culture was well represented even though its hits usually were not big radio chartbusters. Omigod! does the do in looks and packaging, a massive 7-CD set with an accompanying book and three-dimensional vinyl lettering on the lid of the ornate box. Unfortunately, in Omigod!'s attempt to pull everything Eighties into one package, all subtlety has been stripped away, leaving only the obvious -- seven discs worth of the most incessantly overplayed smashes of a decade. It's all here except the cocaine; the aforementioned "Whip It" kicks things off into a morass of rock and soul that includes everything from Styx's "Mr. Roboto" to "Don't You Forget About Me" by Simple Minds. The list is endless, and if you know anything about the decade, you know which song is picked by each act, whether it's Dream Academy, Big Country, Human League, Fabulous Thunderbirds, or Dexy's Midnight Runners. Even if a band wasn't a one-hit wonder, they might as well have been. The oddest choice here by miles is "General Hospi-tale" by the Afternoon Delights, and no doubt the soap-opera nature of that song goes far in telling the market this set is aiming for. Let the hip kids dig through Rhino's more adventuresome sets, this one is purely for that former sorority girl who just wishes she could remember her partying days a little bit clearer. You know, the one who doesn't realize that Frank Zappa's "Valley Girl" (included here) wasn't meant as a compliment.