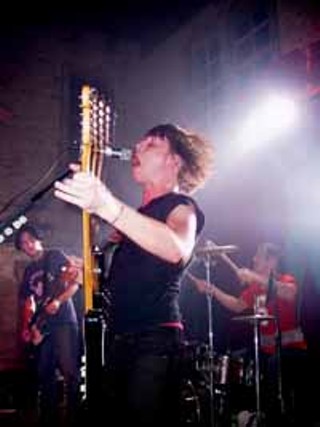 Stubb's, July 26 Sometimes a little knowledge is a disappointing thing. Typically, reading about music isn't as dangerous as reading about film; there aren't plot spoilers, just opinions and comparisons. If you've read anything about Australia's Vines, you've no doubt seen NME's über-hype: in May they declared the Vines "The Best Band Since Nirvana." Now, the once-venerable British weekly is sending similarly hyperbolic valentines to the band's frontman in a piece subtitled, "How Falling in Love With Craig Nicholls Will Change Your Life Forever." By now, lumping the Vines in with the Hives is passé; more current, perhaps, is noting Nicholls' on- and offstage madness. (He's "barely on nodding terms with reality," says NME.) That is, after all, where the disappointment set in at Stubb's; Nicholls' stares, primal screams, exaggerated windmills, floor-writhing, and set-closing drum-destruction were more anticlimactic than thrilling. Similar play-by-play accounts of the band's set have appeared in periodicals across the country and in fan diaries on the net, begging the question of how authentic Nicholls' nightly breakdowns are and how long they'll remain even vaguely noteworthy. It's not that the show would have suffered without them; the Vines are unquestionably tight and outright snappish live. They're so compelling, in fact, it hardly mattered that they played an encore-free 47 minutes and burned through their three best tunes (Highly Evolved's title track, "Get Free," and "Outtathaway") in the opening 20. The group's highly anticipated Travis-like adaptation of OutKast's "Ms. Jackson" would have been better served as a one-verse pony, but they managed to breath life into tunes like "In the Jungle" and "Mary Jane." If the Vines had hit town without the hype, their set would have been an unwavering success. Of course, Stubb's would have also been empty -- a far cry from this sauna-like sellout. In that, it's appropriate the show's most memorable moments were more about Nicholls' growing mythology than his music. It's how you exit a room that people remember, and Nicholls left aloofly, falling over a drum set. Highly evolved musically? Definitely. Highly entertaining? Unfortunately enough, only if you didn't see it coming.