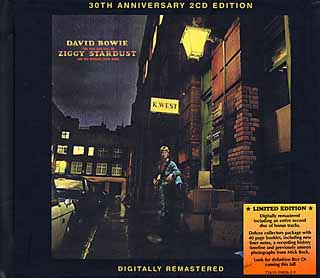 Ziggy Stardust (EMI/Virgin) Thirty years after its release, The Rise and Fall of Ziggy Stardust & the Spiders From Mars is widely heralded as one of the finest and most influential albums of the Seventies. Recorded mostly live in the studio in late 1971 and featuring Bowie's definitive band -- led by guitar hero/singer/ arranger/ pianist Mick Ronson -- it stands as one of the most exciting hard-rock albums of all time. Ostensibly a concept album about an alien landing on earth and leading a rock band, the "story" only appears in half the album's songs, and is so open-ended that it never interferes with the joy of the music. Bowie's songwriting had reached a lyrical and musical peak, and in Ronson's capable hands, the album seems to encompass all the nuances of British and American rock while pointing unmistakably to the future. This 30th-anniversary reissue is magnificently remastered, beautifully packaged, and comes complete with a bonus disc that includes all eight outtakes from the Ziggy sessions, two Bowie solo demos, and two tracks from a Bowie side project. Of the outtakes, "Round and Round" is one of the top three Chuck Berry covers of all time; the terrific UK hit "John I'm Only Dancing" is presented in its rare original 45 version; the outtake "Sweet Head" has some interesting studio chat; and best of all, "Holy Holy" is presented for the first time on CD in its re-recorded Ziggy version. From the happy radio pop of "Starman" and the epic "Moonage Daydream" to the pre-punk slash 'n' burn guitar of "Hang On to Yourself," rock & roll just doesn't get any better than this.