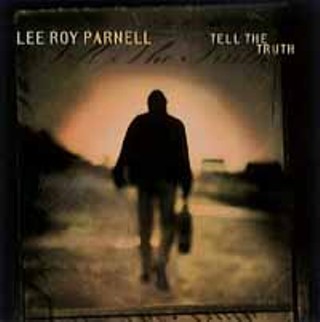 Lee Roy Parnell always had country in him -- he is a Texas boy, after all -- yet never seemed to fit into Nashville's pretty-boy mold while he recorded for labels there. He saw some degree of success, yet his style always leaned toward blue-eyed soul topped off with distinctive slide guitar, characteristics that never really fit into the flaccid pop passing for country these days. Tell the Truth is Parnell's first disc for Vanguard, a non-Music City label, and finds him seemingly revitalized, playing the music he wants to play, the way he wants to, and obviously enjoying himself. He's teamed up with such stellar songwriting partners as Dan Penn, Gary Nicholson, and Tony Arata for a set of tunes that's nearly perfect for his soulful vocals. The album's highlights are duets with Parnell's like-minded musical buddies; "Breaking Down Slow," with Bonnie Bramlett, is a smoldering number that builds from a subdued start to a fiery conclusion. Old pal Delbert McClinton, meanwhile, joins Parnell for "South by Southwest," a rollicking bit of Texas funk, and Keb' Mo' adds fine guitarplay to the acoustic-based "I Declare," a nice break from the album's generally electric setting. Nothing groundbreaking here, just a good ol' gumbo of country, blues, gospel, and soul played with heart and verve. Ain't nothing wrong with that.