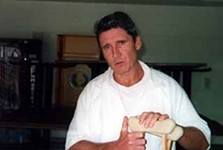 Robert Conran sat down to dinner at Furr's, and walked out in handcuffs. After four years in prison on a shaky conviction, he's got a chance of parole -- then he faces deportation

As more and more people have abandoned Austin, the feral cat population has soared.

Governor Perry and his 82 vetoes: Government by Negation

A brief analysis of a number of Gov. Perry's vetoes

Cuisines writer Barbara Chisholm challenged her colleagues to host a dinner party for $50 or less; here's what each of them came up with.

Cuisines editor Virginia B. Wood remembers Ninfa Laurenzo, the founder of the popular Ninfa's Tex-Mex chain, who passed away last week, and updates readers on the culinary news around Austin.

Where to order Austin-made pizza.
music 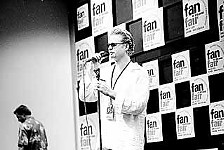 Right Man for the Job

Through the 90s: Singles and Unreleased

Are You Ready for the Big Show

Slack Where We Started

Richard Linklater and John Pierson Ponder 'Slacker' and Its Aftermath

What We Said Then

Excerpts From Our 1990 Review

To auteur or not to auteur, a fabulous gay movie awards ceremony, kraut-rock!, and now boarding for Lonesome Dove.

Remembering Carroll O'Connor, the man who immortalized Archie Bunker, and giving chickens their due.

A tribute to Gowns by Adrian

Flood relief is on the way for Houston arts organizations devastated by Tropical Storm Allison and a memorial service is being held for longtime Austin actress Judi Sklar Becker.

Wayne Alan Brenner's friend Sylvia has an opinion about the Vortex Repertory Company's workshop performance Uncaged: The public deserves more for its money than an end-of-the-workshop variety show unless what's onstage is well-performed and original, and except for a handful of pieces by a few participants -- most notably the emcee Ratgirl -- she thinks this isn't.

Although Austin Playhouse's revival of The Fantasticks is burdened with more than a few trips and stumbles, the show has evident charms, and here familiarity breeds not contempt but something warmer.

As Victor, a septic tank salesman burying a shitload of anger in Daniel MacIvor's solo show House, Ken Webster brings the house down, then builds new theatre for the audience.
columns

Even being in Slacker didn't prepare Chronicle Editor Louis Black for the film's eventual impact.

Our Free Radio coverage generates some audio radiance, and more.

Free wheelchairs, fan-tasic, and Grrrrrrrrly Action: What a hot summer it's heating up to be in Austin's public-service community.

If information's a microbrew, here's your favorite pub.

Meet the grill of your dreams at the New Braunfels Smoker Company.

Ubermodels take the stage at a local bar. Why? Why is the Austin fashion scene so divided? Work with me, baby …

A friend recently had the silver fillings in her teeth removed and replaced with ceramic fillings. Although it set her back over $2,000, she says she is feeling better already. Is this something I should do?

A few observations on the U.S. Open and Wimbledon

Not Your Mother's Hockey Puck

Austin's Women's Hockey Team, the Roadrunners, Face Off Against the Gender Gap.